Blog Artists Organisations Events Writings About
Welcome to Sounds of Europe, a platform for field recording. The blog of the website will travel to a different European country every month where a local organisation or artist will be responsible for maintaining it. Each country´s particular context and practices with regards to field recording will be explored and presented in a personal way.
BLOG
The act of recording, by Éric LaCasa
03/22/2012 · Pali Meursault 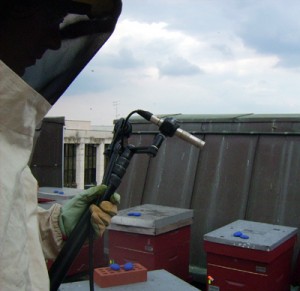 Field Recording, a unifier term for the practices all of us are dealing with around here, I can’t help stressing out the notion of recording as a relation with the field. Being ‘field’ sound artist points at that encounter with an environment, before any kind of aesthetic appreciation of the (technical) modalities. And whatever the conditions of perception of that ‘outside’ might be, through the microphones, the recording is fixating a space-time of which the qualities are depending on the whole ensemble of what composes the field (and this fixation of a ‘real’ time is also one of the issue of the archive). But by making a choice among the elements that composes this completeness, the recording also becomes the expression of a specific listening, or in other words: an invention. So the recording is not a mere report, in a photographic sense, but a counter-type that establishes another form of relationship with the outside world. This is only for that reason that the recording differs from just listening. The recording would be an aim, in an aesthetic sens, that opens a new perspective on the way of listening. A veritable composition that produces a landscape, the score of an environment, of a reality. Recording and composing would therefore be comparable ways of being in relation with the world.

Reality, then, would only be a ‘fiction’, which is produced (by the attention) as the recording is made. Distinct from any scientific process, the sensible reading of the world by a sound artist contributes to an aesthetic construction of what is around us, the moment of the recording.

How would we be able to distinguish, to discriminate what is sonic from everything else that keeps on happening while we’re recording? How can we talk about the sonic environment, or about the soundscape, as something that could be perceived alone? When I am recording, the world is not only made of sounds. That wouldn’t be fair to dissociate the sound from its context. The sound opens to all of the other dimensions, of which it is absolutely dependent.

Why does the term of Field recording also applies for (musical) studio compositions that use sounds recorded in the field? There is a fundamental ambiguity there. I still make a clear distinction between what happens in the field, in contact with reality, happening in real-time, and what is produced (afterwards) in a studio. Composing on location, as we listen to the living thing and composing in a studio from field materials are two practices that are absolutely different. The experience of what would be (mostly) improvised in real-time with all of the dimensions of the field as nothing in common with the musical production of a space-time under control, even if that space-time is based on intrinsic marks of the same field. Besides, the french word for Field recording – enregistrement de terrain – has not much to do with the question of musical composition. Even if I mentioned before the intentionality of a sound recording, the direct tension with the field does not compare to studio practice. For anyone listening to a piece of sound art, it is clear if the issues at stake are located exclusively in the field or exclusively in the studio, sometimes in both.

For my part, I observe that it seems difficult for Field recordists not to make of the studio work something that is as important as their experience in the field. Then again, that might not be there, in the studio, that their interrogations are the most relevant. (Musical) composition in the studio actually implies a virtuosity of writing, this is what studio work is mainly about. I don’t see a lot of comments about these questions of composition among the community of sound recordists, they seem more interested in the nature of their technical equipment. Thus the issue of the field is mostly about recording sound and not so much about composing, which one might regret sometimes. Yet the experience of the field should have its own ways of writing,in order to be transmitted to an audience. As much as field recording is not just the report of a reality, but its fiction, its diffusion for an audience has to be reflected upon so as to establish a connection between the field and that domesticated listening. In other words: how to commit the links between the field, the listening, and the time necessary for anyone take a hold of the experience, wherever it might take place?

As I have opened the technical question, let’s push the door wide open. Yes, recording is a technical act. But that doesn’t mean it can be reduced to its technicality, to its know-how. I think that, as it is for music, sound recording has its own biases and norms. It is important to say that our tools have to remain plural, that we have to go past the only question of quality, which is only a matter of standardization. There is no standard, or norm, for artistic creation. And this is not for the engineers to establish the thresholds of knowledge but for the practitioners to constantly make the limits of knowledge to move. Let us praise for a plurality of field practices and sound approaches, because not possessing the best equipment does not prevent from having great ideas.