Blog Artists Organisations Events Writings About
Welcome to Sounds of Europe, a platform for field recording. The blog of the website will travel to a different European country every month where a local organisation or artist will be responsible for maintaining it. Each country´s particular context and practices with regards to field recording will be explored and presented in a personal way.
BLOG
Sound Stories from the Baltics, abandoned Latvia #1
06/17/2012 · John Grzinich 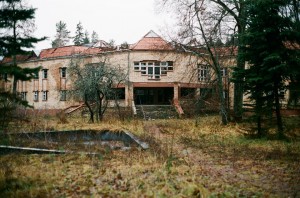 This story comes in from Maksims Shentelevs, a sound artist and architect whom I’ve known for many years and made numerous collaborative projects with. One of our common interests is exploring spaces and places in the Baltics that have fallen into the folds of history and making site-specific interventions. Max was kind enough to send me several stories of some recent discoveries with many photos and recording documents.

This is my favourite recently discovered location, an abandoned sanatorium, surrounded by forest, quiet, close to the Daugava river, collapsing from decay. I don’t visit it often. Its too far from where I live. Daugavpils is 250 kilometers from Riga. Its on the edge of the country, but every time I come it is brilliant. It seems that the weather is always perfect here and the buildings break down more with each visit, providing new playgrounds. There are plenty of exciting spaces both in and out of doors. Two or three ward blocks, a cinema hall, a huge indoor swimming pool, sport hall, and more. It was built in 1980. Abandoned in 90ies, it has been left competely open since then. Nature is fast, breaking down the inside of the buildings. The forest is taking over. Last time we arrived goats were wandering the sanatorium grounds. We had a wonderful walk and two nice sound improvisations. First in the staircase of the cinema where the concrete stairs were disassembled and now open to a full height atrium. Walls of glass block were broken down uncovering reinforcement bars as strings of a grand piano. Floors were all covered with broken glass, bricks, bits of concrete metal parts and wood frames from windows and doors. I hung my microphones on the very top of the space under the ceiling and we played on different levels in what previously was the large main staircase. As there were no windows left, birds from the forest were accompaning us. It was a bit dangerous as glass shards and bricks were falling down as we moved.

The second improvisation was in sport hall with concrete walls, metal trusses, rotten wooden floors, open beams with lines of rusty nails sicking out. Winding wire, piles of autumn leaves, dry branches and the buildings themselves – were our instruments.

I’m an architect. I love sound of buildings, both being constructed and falling apart. Its just a space captured for a moment of time in between walls. As life itself, buildings seem so full of matter that we rarely realize that its actually emtiness that we shape by meaning. 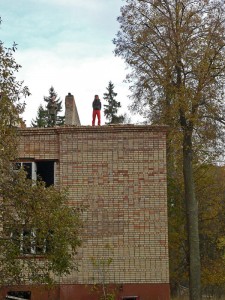 Max is one of the key members of Bernu Rits, an experimental sound and musical group based in Riga Latvia.