Blog Artists Organisations Events Writings About
Welcome to Sounds of Europe, a platform for field recording. The blog of the website will travel to a different European country every month where a local organisation or artist will be responsible for maintaining it. Each country´s particular context and practices with regards to field recording will be explored and presented in a personal way.
BLOG
Surrounding Silence – Another Aspect of a Sound Art Exhibition
05/12/2013 · Zsolt Sores

In my last writing I already introduced the performance and installation of Binaura and Szövetség’39 what was held on 4th April, 2013, the last day of the sound art exhibition “Amplified Space – Acoustic Space Experiments” (Akvárium Club, Budapest).
Péter Tornyai’s ”Ricercari dello spazio” (2013) is piece for a four channel spatial variation and consists of four short parts. The four different sound-images (which are primarily field recordings) undergoes the same series of spatial-acoustic transformations cause by the the ever-changing ”proportional canon” of the four sound sources. 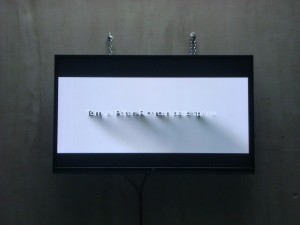 In her single channel sound and video installation ”Untitled /Speculative Proposition/” (2013) Csenge Kolozsvári created (performed) a heterotopic space for imagination ”the tactile connection between the digitally altered moving image of the performance and the analogue layer of vibrating water, (as well as the relation between the loudspeakers and the glass container of the water, that produces visual vibration) generate a heterogeneous, but coherent substance of complexity. The increasing intensity of the resonance in the sound and in the water distorts the perception of the moving image, thus the sound slowly takes over the experience, creating engagement and predisposing an exchange among presences and experiences.”
András Blazsek’s piece called ”Pavilion” (2010) is the reconstruction of his diploma project at the Hungarian University of Fine Arts Budapest. The piece is a paraphraze of the classic avantgarde work by Alvin Lucier I am sittin gin a room. The sound of two Akai tape recorders is the core of the installation: the first machine of each connected pair recorded the sound of the studio (the silence) on the tape; the other machine played the recorded sound of the studio (the silence) back 43 seconds later (the delay was due to the distance between the tape recorders) while the first one at that time started to record the atmosphere of the studio again. The reverberation of the room was added to the recorded material and the neverending circle resulted in sound interferences (feedback):

The other type of installations used ”artificially created” field recordings as auto-generated feedback structures from the space itself like Gergő Nagy’s ”Cycle of Two /A Sonic Environment for Subconscious Awareness/” (2012) is a sonic environment modeling subconscious processes with the perception of sound leading us to higher awareness. The installation is a micro- and macro-aural spaces discovery in the networks of our attention through the polyphony of spatial sonic layers: 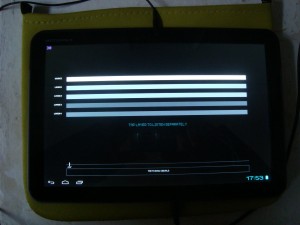 Diversity and the ”special” feeling of the (hidden) silence is one of the consistent characteristic of sound art. It has no stylistic or idiomatic commitment. It has no prescribed idiomatic sound. The characteristics of using field recordings in music pieces and sound installations are established only by the sonic-musical identity of the person created it. It is obvious that even without using the mythical concept of the golden age, we can say that in the beginning (if there ever was such a privileged first moment) music was the environmental sound of our world where we lived in the prehistoric times: the cristallization into compositional dogmas and the art forms came only later. Sound works and music based on field recordings, that is the art of the ”listening, sound editing or manipulating” occupies a special position in the history of human culture, because it seems to be drawing a peculiar circle through the development of music by turning back to the origins of musical/sound art  activities. It recalls (and not repeats) a trodden path. As a part of experimental music (agreeing ”per nondefinitionem” with the American musician Nicolas Collins in that the music of experimentation is not the outcome of a ”parallel culture”, but is striving to be ”different” and at the same time to avoid definitions), field recordings and the various clusters of sound samples collections makes a very often fruitful attempt at helping to build a unique immaterial art to dictate its own form. The invocation of this form requires creative and innovative people.
Atonal music created dissonant harmonies and knowingly avoided the feeling of tones: it made it possible for every note of the chromatic scale to be equal. It disregarded the tonalities of classical music, but it still stuck to its strict forms. Later directed hazard became the organizing principle of the ”landscape music” played on cans, doorbells, seashells, coiled wires of radios, tapes (with full of analog field recordings), thereby further loosening compositional rigidity. Parallelly, the role of environmental noise, of notes resonating irregularly at an indeterminate pitch increased in experimental music not only in free jazz, ”contemporary” electronic music etc., but also in the more endeavouring part as well as of the intermedia activities. (In contemporary terms this ‘conceptual fusion’ is now the homogenized site of the digital, where the digital interface is the meeting point – the intermedium. Like New Media, Intermedia is an umbrella term – in art school and institution speak – that generalizes the use of technology.) 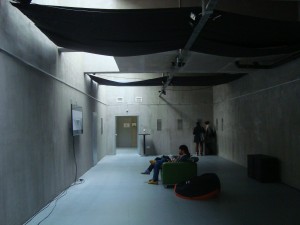 Together with other elements of the (different kind of) arts, the possibility of the eclectic mixture blended in the meta-sound form of the art of field recordings, and became a homogenic unity by finding the common points of perception, exact measure and creative dialogue. Although all artworks based on field recordings has been more and more important field of activity for contemporary, experimental and avant-garde arts, it has not yet reached the final point of its development. This sound art-installation and action-artistic (musical and performative) art form based on the technique of recording something ”natural” and ”pure”,  ”already existed” material arrives at higher and higher circular courses on a spiralling line of development: but perhaps even this approach is not descriptive enough, since if something works in a metalinguistic mode (or as the background of all silence) by continually autodefining itself, then it tells about organization by the way of organizing – productively, tautologically. And if you are able to hear the silence you are hear the space itself (not that you are isolated). And through the silence not the ego, not the conscious mind but the true self connected to the world of around us.

← “No Distance. No Contact” or We Just Felt the Need of Another Reality Check
call for workshop participants: SONIC MMABOLELA →