Blog Artists Organisations Events Writings About
Welcome to Sounds of Europe, a platform for field recording. The blog of the website will travel to a different European country every month where a local organisation or artist will be responsible for maintaining it. Each country´s particular context and practices with regards to field recording will be explored and presented in a personal way.
BLOG
Towards the Sound Realism – Hommage à New Music Studio
04/21/2013 · Zsolt Sores

The New Music Studio was the first Hungarian avant-garde workshop, which was established in 1970 and was active until 1990. The socialist system (or with Guy Debord words, the ”bureaucratic sector of capitalism”) has been disintegrating since 1989 in Hungary and many Central and Eastern European countries. This period is often referred to as the transition from socialism (ideological and cultural dogmatism) to capitalism and is characterized by some specific features, qualitative and quantitative, different from those observed in pure socialist or pure capitalist social and cultural systems. In those decades the works of Hungarian composers and sound researchers could only be performed and released according to a predefined set targets by a central communist committee. The proverbial categories of the ”Supported, Tolerated, Forbidden” characterized this era. Experimental music (and any possibility for any kind of sound art) was partially subjected to drastic repression under the dictum of politically motivated Social Realism, and banned to niches until 1990. 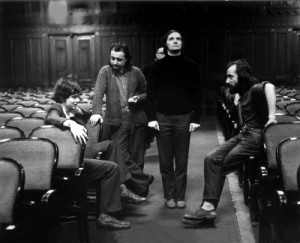 ”…the Studio’s output well represent the musical history and New-Music culture of the age, while simultaneously providing a window into the special relationship between politics and art: it functioned under the political aegis of the Communist Youth Central Musical Ensemble, and its members were university students of performance or composition. Hence they received larger press, and the opportunity for regular concert performance. (…) Still, their prestige was not as great as their name recognition. This background gave them a particular sense of freedom… (…) They had freedom to develop an aesthetic palette, which was palpable in the works they performed. (…) Zoltán Jeney’s work with minimalism and sound synthesis, László Sáry’s deconstruction of musical material, and László Vidovszky’s open works – all these born of a general interest in algorithmic techniques.” – describe the communist era by Balázs Kovács in his 2012 study about the tendencies of the contemporary experimental music and media arts in Hungary. Source: B.K.: Freedom is Mere Illusion – Experimental Music and Media Arts in Hungary. In: Carsten Seiffarth – Carsten Stabenow – Golo Föllmer (Eds.): Sound Exchange. Experimentelle Musikkulturen in Mittelosteuropa / Experimental Music Cultures in Central and Eastern Europe. Saarbrücken, PFAU Verlag, 2012, pp. 129-130. (Balázs Kovács alias XRC is also a sound artist and a teacher, creating field recording based soundscapes among different types of sound-media artworks. He lives and works in Pécs, the fifth largest city of Hungary, located on the slopes of the Mecsek mountains in the south-west of the country.)

The New Music Studio’s artists used field recordings in their electroacoustic music as the first in Hungary. Unfortunately nowadays their albums are no longer available and the complete re-editions are not yet in sight. Their wonderful and athmospheric compositions such as Péter Eötvös’s ”Cricket Music” (Organised nature-sounds, 1970), Zoltán Jeney’s ”For Glass and Metal” (1982) and their collective pieces (for instruments and pre-recorded sound materials) are very influential and was the first steps towards to the vision of a new sound economy, the conceptual acousmatic sound and the creatively integrated field recordings.

The common works in the studio’s story was very significant, but they marginalized soon after all. The plainest reason is the technical character of the pieces: almost all of them prepared for too costly plus demanding special electronic equipments from the institutions. Unique acoustic concepts included in these works, which acoustic and environmental conditions today can be also very difficult to implement. Today, we might as well understand that the biggest controversy was triggered by the common compositions. Behind the implementation of these works were not only new compositional techniques, but the essence of the music they wanted to change the perception. These principles are significantly different from the classical and romantic eras of personality, self-expression and representation-centered approach of. The innovative oeuvre of the New Music Studio has a great influence on the young generation of the Hungarian sound artists. The members of the New Music Studio are active composers and performers in our new era as well: László Sáry’s ”Locomotive Symphony” (1998) perhaps the most ambitious acousmatic piece in the Hungarian contemporary music based on field recordings. 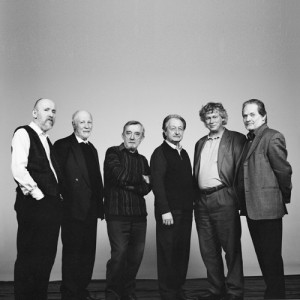 ← Farewell soundscapes
“No Distance. No Contact” or We Just Felt the Need of Another Reality Check →