Blog Artists Organisations Events Writings About
Welcome to Sounds of Europe, a platform for field recording. The blog of the website will travel to a different European country every month where a local organisation or artist will be responsible for maintaining it. Each country´s particular context and practices with regards to field recording will be explored and presented in a personal way.
BLOG
The human soundscapes of Tiago Pereira
12/04/2012 · Raquel

Tiago Pereira is a Portuguese video director and visualist who has developed a unique style of documenting, recollecting and mixing moving images. His cross-disciplinary video work focuses on the immaterial culture such as songs, rituals and performances that explore the concept of tradition and the foundations of collective memory. Some of his films, such as 11 Donkeys Fall in an Empty Stomach (2006) and Singing Troubles Away (1998) have been awarded national and international prizes. He is member of the OMIRI musical project, collaboration with the musician Vasco Ribeiro Casais, on fusing technology with tradition to create sound and visuals that are a complex mix of past, present and future. 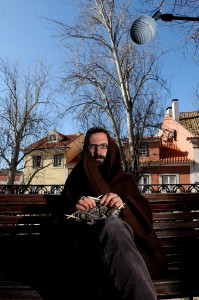 Tiago Pereira’s work combines in a peculiar way sound and video recollections with live audiovisual performance. Tiago records the arts, talents and knowledges of the people from the rural and secluded Portuguese landscape onto digital format and remixes it in realtime for an urban audience.

Travelling across Portugal while capturing songs and instrument playing, Tiago Pereira has been developing a database of knowledge that has been passed on from one generation to another by musical means. Keeping it in a digital format will help to preserve the cultural memory and also to reinterpret it. The voice has a primacy over the other sounds, but Tiago always records the environment, paying a deep attention to the sources of sound, which he visually treats with a very careful, sensible and always, rhythmical way. Tiago mixes and remixes what he records, creating loops and mixtures that give other meanings to sounds. His soundscapes are, though, mainly human. In fact, his whole work is full of humanity, strong characters, old sayings and songs, many songs.

It’s very usual to see in many of Tiago Pereira’s films, microphones and people recording or listening to the ambient.

The sentence “see this sound” suits well Tiago’s work, who’s always looking for ways to make visible the sound and the people who make each sound. Seeing the sound, where it comes from, is a way to understand it better.

A few years ago, Tiago created the online Portuguese channel called A Música Portuguesa a Gostar Dela Própria (Portuguese Music Enjoying Itself). This is a database of small clips containing artists singing and playing, in different places, archiving different kinds of music recorded in different sonic contexts which are not, in general, traditional venues for concerts.

Tiago Pereira has time to listen. He is always running and doing many projects, creating new ideas and concepts, researching the newest technology for remixing visually and aurally what he records, but when he’s in a place to listen, to record someone or somewhat, he stops and listens, even if it’s only for 5 crucial minutes. Many of the people he collects to his open archives, are not so used to be listened by younger ones with so much interest. They open their houses, hearts and families to this very fast and curious man with a video camera and an audio recording device, mainly because he really wants to listen to them.
This is the deep humanity in Tiago Pereira’s multiple soundscapes.