Blog Artists Organisations Events Writings About
Welcome to Sounds of Europe, a platform for field recording. The blog of the website will travel to a different European country every month where a local organisation or artist will be responsible for maintaining it. Each country´s particular context and practices with regards to field recording will be explored and presented in a personal way.
BLOG
Bodywaves by Stanier Black-Five in Ljubljana
07/27/2012 · Miha

Responding to the theme of the ICMC conference in Ljubljana (Non-Cochlear Sound), Stanier Black-Five in collaboration with Dr Malcolm Riddoch (for biography see link that follows), proposed a live infrasonic performance whose sounds go beyond the auditory system to be felt in the body. 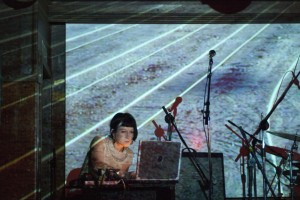 The primary sound source in this exploration of vibroacoustic perception are the unique recordings made by Stanier Black-Five at the epicentre of the recent earthquakes in New Zealand, which capture the vibrations of its massive aftershocks, collapsing buildings and subsequent demolitions. Riddoch will transform this live performance using MaxMSP and digital mixing for quadraphonic spatialization and waveform extrapolation to accentuate lower frequency harmonics. Sinusoidal analysis will be used to convert the waveform data to controllers in order to automate the spatialization with live mixing to balance the enhanced infrasonics. The performance will emphasize somatic feedback to guide the improvisational aspects as the infrasonic soundscape evolves over time. Body Waves is a spatial work indeterminate with respect to performance and spatialized through a quadraphonic set-up to immerse its audience/participants in this visceral music of the body.

Stanier Black-Five is a sound artist and writer based in Christchurch, New Zealand, who for the last 15 years has been actively involved with experimental music and sound art in the UK, Europe and New Zealand. Her audio work is largely based on the manipulation of her own environmental recordings, as well as found sounds, which she uses to create dense soundscapes that use sources such as mesmerising aircraft drones to the pounding rhythms of trains and more recently the sounds of the earthquakes that have shaken her city.
She performs regularly both in New Zealand and internationally and has taken her visceral musique concrète to the UK and Europe, performing alongside artists such as Chris Watson, Daniel Menche and Jessica Rylan and presenting her work at festivals such as London Musicians Collective’s annual Festival of Experimental Music.
Stanier Black-Five is actively involved with communicating about sound art and experimental music, through radio shows –  on stations such as the UK’s Resonance FM to Christchurch’s RDU – as well as magazines – such as the UK’s Noisegate and Berlin’s Datacide – as well as writing a chapter in the forthcoming book Erewhon Calling: experimental sound in New Zealand, edited by Bruce Russell.

Malcolm Riddoch – His musical interest is experimental electroacoustic improvisation and phenomenological method: An investigation of acousmatic listening and electronic transformation of soundscapes; notions of indeterminacy in composition and performance; the use of whole acoustic spaces in music performance; and electroacoustic improvisation as an embodied, intentional, temporalizing process.

His medium is non-tonal, timbrally focused musically organised sound and thematic dissolution is my musical theme.