Blog Artists Organisations Events Writings About
Welcome to Sounds of Europe, a platform for field recording. The blog of the website will travel to a different European country every month where a local organisation or artist will be responsible for maintaining it. Each country´s particular context and practices with regards to field recording will be explored and presented in a personal way.
BLOG
Bostjan Perovsek – the Slovenian Pioneer of Fieldrecordings
07/29/2012 · Miha

Bostjan Perovsek is a free-lance artist, musician and composer. He started his musical way in the second half of the seventies in the group for experimental music SAETA (Ljubljana, Slovenia). They did a lot of experimenting with the sound mass, the electro-acoustic works prevailed. He gave performances over former Yugoslavia and throughout Europe. When Bostjan Perovšek decided for performing outside the group he wanted to open a different sound world. So in 1985 he got acquainted with the sound world of animals, specially of insects. 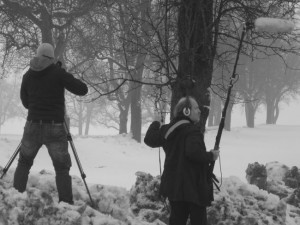 At his work he collaborates with scientists from the bio-acoustic field, so he named his music the bio-acoustic music. He is interested specially in joining sound rhythmic and phraseological differences of insects’ melodies. They are previously not treated with the sound processors or sampled and afterwards played in different tone position. The only manipulation is the composition itself, which inter-actingly connects different insects’ melodies, sounds of electronic and acoustic instruments in the integrity while the listener many times difficultly decides whether they are naturally or artificially produced sounds. Lately the composition Bugs, a Walrus and the Door are Dancing in a circle was placed into the series ‘Radio: Ars Acustica 1995-1996 Listening Proposals’ in the framework of European Broadcasting Union ,Active and Associate Members, Ars Acustica Specialists. He makes music for public music and inter-media performances, dance performances, movies and also makes sound formations of public buildings like museums and galleries. In 2008 he made music for 4 films for national TV Slovenia. Some of them are available in archive of TV Slovenia and some musical examples from those films are available also on this website: www.perovsek.si

Bostjan Perovsek is one of the featured artists at the ICMC – International Computer Music Conference 2012 – www.icmc2012.si , which will be held in colaboration with the EarZoom sonic arts festival 2012 between 9th and 14th September in Ljubljana Slovenia. ICMC & EarZoom are organized by IRZU – Institute for Sonic Arts Research – www.irzu.org and supported by several other Slovenian organisations.

Bostjan Perovšek will present his 1986 composition: BUGS, WALRUS AND THE DOOR ARE DANCING IN CIRCLE, (his first bio-acoustic piece). The piece will be shown as an installation within a group exhibition in ŠKUC Gallery – http://www.skuc.org/ – curated by ICMC Installation Chair: Brane Zorman – http://radiocona.wordpress.com/

The piece Bugs, Walrus And The Door Are Dancing In Circle was premiered on the 6th November 1986 in the Cankarjev dom Gallery in Ljubljana. The piece was part of the project “November Testimonies by Florjan Gorjan”. The project featured three authors which decided to show their work at the same time, and in the same space. Sharing a common basic idea, the three pieces were revealed to the public as individual works, which were able however to co-exist as well as to interact amongst themselves. The image created through the media was also supporting the author’s concept, since it was announced as three different works taking place at the same place, at the same time. Each visitor received three tickets of different colors which also supported the threefoldness of the project. The core concept of the project (the happening and the music) is to represent the gap between the natural and the artificial, between the concrete and the illusion. We are surrounded by objects, concepts and states, which have an inherent purpose and according to that, they convey a specific content in a particular moment. This content is represented as the natural, self evident matter. If this objects, concepts and states are freed from their concrete (natural) state, they start to gain a different function and start to manifest themselves as illusory (artificial) states. The November Testimonies by Florjan Gorjan are dealing with the relations between these particular states.