Blog Artists Organisations Events Writings About
Welcome to Sounds of Europe, a platform for field recording. The blog of the website will travel to a different European country every month where a local organisation or artist will be responsible for maintaining it. Each country´s particular context and practices with regards to field recording will be explored and presented in a personal way.
BLOG
Field recording – a completely new world
01/19/2013 · Maria Balabas

I started to record and pay attention to the personality of recorded sounds in 2006, while I was studying in a small town in Germany and, at the same time, writing scores for a German composer. I remember it was a completely new world for me, with no rules, no need for justification, as everything was, apparently, permitted. My first experiments include small radio-features, a toilet-soundwork for a conceptual party and a sound essay called Das Semester Ticket. The last one was broadcasted by Resonance FM so I gained courage and continued to develop my skills, esthetics and knowledge.

I recorded everything I could at that time, being absolutely fascinated by, for example, the luxurious sound-knitting from the outdoor festivals or by the eclectic and multicultural atmosphere from the Asian cities like Kathmandu or Varanasi. Suddenly, I was caught in an aural frenzy I wasn’t aware of until then.

In 2007 I participated in the Sound Delta project and I travelled, recorded and performed in Brussels, Antwerp and Rotterdam. Since then, my activity as a sound-recorder and creator didn’t stop. I am continuously enriching my radio-reportages with sound-icons taken from various places on Earth or from my own country. As a small example, trying to spread the practice of sound-listening and the consciousness of the poetics of sound-surroundings I created all the jingles from the morning daily broadcasting program called Dimineata crossover (from the National Cultural Radio) using specific field recordings. 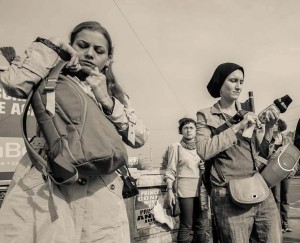 As time went by, I started to develop my creativity and to use my continuously growing sound-archives in an artistic personal way: Africa Estului (Africa of the East) – a piece done using field recordings from a flash mob based on the idea of an ephemeral group creating a hard sound during 3 minutes. Pasarea care-ti musca auzul (The Bird That Bites Your Hearing) – a sound and graphic installation, done for the 7th edition of Explore Dance Festival, combines recordings from the soundwalks I organized in Bucharest (together with Daria Ghiu) with other personal sound-icons, everything being transformed in a 50 minutes piece where field recordings are mixed with the musical ideas of my brother, Mihai Balabas, and with an abstract text, recorded with my own voice. I would also name here another outdoor-indoor performance-installation called La madeleine sonore  conceived for the French Institute from Bucharest, during their event called Le Cri de Paysage; for this one I also worked with my brother, in order to create a very specific atmosphere, and used field recordings from villages and other rural places of Romania. 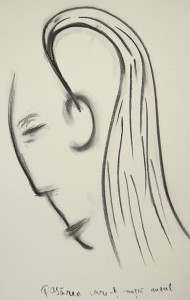 On a short-list, these are the things I’ve created, trying to develop a very personal understanding of the emotivity and symbolic power of field recordings. It’s still a new and amazing territory for me, as in Romania there is no place where you can learn about and experience phonography; the only constant preoccupation involving this kind of recorded sound is the ethnomusicological one, in the tradition developed by names such as Constantin Brailoiu, with today’s result of collections such as Ethnophonie. But these initiatives will be covered in another article. 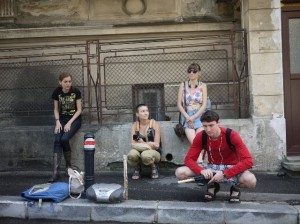