Blog Artists Organisations Events Writings About
Welcome to Sounds of Europe, a platform for field recording. The blog of the website will travel to a different European country every month where a local organisation or artist will be responsible for maintaining it. Each country´s particular context and practices with regards to field recording will be explored and presented in a personal way.
BLOG
Field recordings into art scene: the installations made by Larisa Crunteanu
01/29/2013 · Maria Balabas

Larisa Crunteanu is a performer, visual artist and sound-archivist. Her works question the power relations in intimacy, the body and the notion of identity.

She is one of the few Romanian artists interested in field recordings and she is already using her own archive as primary material in art installations. As her initiative is quite singular in Romania and is engaged in portraying the contemporary society and its characteristic audible gestures, let me introduce two of her projects to the Sounds of Europe audience.

Aud Bucuresti (Hear Bucharest) is an audio installation on 6 channels, completed by a drawing on the floor. One hears 1000 field recordings of the Bucharest public space, done during two years and split by the 6 sectors of the Capital. The project has been presented in 2012 at the Possible Gallery.  Larisa argues her initiative and says that the public space and the public opinion are the guarantees of the production and reproduction of the civil society. The way in which a city is structured and experimented, the way in which the domains for living, work, commerce and time are combined reveal important aspects about the social parameters. The public space, manifested through its visual and aural forms is defined by the social interaction of the citizens. 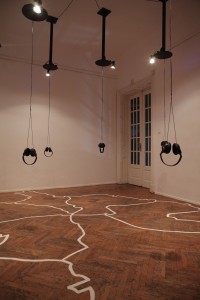 Another perspective is used in the installation Veniti cu totii/Si strigati tare… (Come you all/ And shout loud…) where Larisa uses recordings made at the protests in January 2012 (an iconic moment for artists) and observes the mechanism through which slogans are formed and become active in the mass of people. She says: “If the public space represents us, then we also represent the public space. The body occupies the space and the voice carries further its resonance and sonority. When the power doesn’t have ears for the individual voices, the protest gathers many individuals in a strong multiple voice using short messages, easy to understand and to repeat.” Her project is presented in the exhibition KM 0, run by the space tranzit.ro, in Bucharest. Between the slogans recorded and used in the installation (the sounds are transmitted through a speaking trumpet) one can recognize messages about the president, the local conflict about gold mining, the government, politicians etc, but also small urban poetry without a manifest subject – Cine e trist/ Este securist (Each who is sad/Is a secret agent).

Larisa’s initiative fills an empty space in Romanian art, being one of the few individuals to record the public sounds and, by using their symbolic-potentiality, to transform them into an original creation, with a personal vision. Although at the beginning, because of her dedication and courage (for example, Larisa performed a total 7 days silence in an artistic tour organized through Romania), I’m sure that her ideas will become more and more visible (and audible too!).

← Music of Romania, part III: Sunmoon and Fractaled, the cosmic abyss out of field recordings
The field recordings through the ethnomusicological approach. An interview with Speranta Radulescu and Florin Iordan →