Blog Artists Organisations Events Writings About
Welcome to Sounds of Europe, a platform for field recording. The blog of the website will travel to a different European country every month where a local organisation or artist will be responsible for maintaining it. Each country´s particular context and practices with regards to field recording will be explored and presented in a personal way.
BLOG
Interview – Miguel Alonso
12/22/2011 · Jaume

Hello again, today’s post is an interview with Miguel Alonso Cambrón, read on: 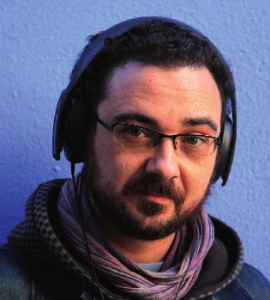 1. Hello Miguel, maybe you could start by introducing yourself?

Hello Jaume. Well, it is a bit weird to talk about myself in English and with a person who already knows me, but here we go. I am Miguel Alonso Cambrón and my educational background is connected mainly to two fields: music and social science. As far as I remember, I have been always interested in music. At the age of three my parents asked me if I wanted to study in the conservatory and I replied that all I wanted to do is to play the drums (as every kid at that age, I suppose). So I had to learn music by myself. Later on I studied social anthropology and became more and more interested in human interpretations of sonic phenomena as part of the cultural habitus and identity. After obtaining my first university degree I did some research on anthropology of the body. Then I took some courses in experimental music and also in ethnomusicology and finally decided that those were my fields of interest.

2. Could you tell us more about your formal education and how it is related to sound?

Well, as I said, in music I am mainly self-educated. I started playing the guitar in some local punk bands in A Coruña and slowly felt attracted to experimental and electronic stuff. From there I went on to use human ambiance sounds, field recording and sociophonic phenomena.

On the other hand, I started studying English Philology at UDC and had a subject on phonetics and phonology. That was my first academic contact with a sound discipline. Then I studied social and cultural anthropology at UAB in Barcelona which was completed with a Master in Urban Anthropology and a PhD in Social Anthropology at Tarragona’s URV.

The relation to sound embedded in my scientific work focuses on the interpretation of urban sound ambiances, on how urban people read and interact with daily sounds, but not any sound. I always talk about “sociophonic phenomena”, which are sounds related to social interaction; the sonic spectrum of social interaction. In a strict sense every sound is a part of social interaction. Plato wrote about it in his work “De Anima,” where he said that every sound emerges from something against something and into something. But my point is related to human beings and the significance of sound in urban daily life, both in public and private/domestic spaces.

3. I recall you have used that approach to study Tarragona, the city where you live. Can you tell us more about it?

Yes, I took an ethnographic approach to sound in the historic district of Tarragona. I did fieldwork for approximately three years. Everything started when I was living in Barcelona and read Bernie Krause’s niche hypothesis. Krause, who is a musician into bioacoustics, studied North American rainforest ambiances in relation to biological activities and came to the conclusion that each species occupied a particular range of frequencies to ensure communication among individuals of the same kind. I did the first attempt at applying these reflections to human ecosystems (it was published in a paper by the Institut Català d’Antropologia and led to establishing a research group in that institution), but as human-social activities are far more complicated than the ones in the rest of the animal kingdoms (or we like to think of it that way, in the end I never spoke about it with any other animal) the projection led to other reflections and new terminology. Krause spoke about “biophony,” as much soundscape composers and analysts do, but this term seemed too vague for me. It focused on life as biological interaction and my interest was social interaction. And then came the notion of “sociophony” which I think is more inclusive, can be applied to all living beings and focuses on social interaction, perception and cognition.

My doctoral research ended with pointing out six phenomena which are important and idiosyncratic for the populations in Tarragona’s historic district. These were (and currently are): “terrazas” (tables, chairs and people outside bars and restaurants), “obras” (building and public works), silence (related to silent places but also to silent times), bells, shouts and transit. Each sociophonic phenomenom is related to a wider social one. “Terrazas” and “obras” for example, are related to the process of gentrification that has been taking place in the district since late 80s: the proliferation of building works including restoration and urbanistic adaptation to the needs of a new kind of neighbour that have emerged since the 80s; an upper-class stratum that is progressively cornering an increasingly impoverished traditional population. Silence is related to presence and the possessions of the catholic church, the Cathedral and its surroundings, as the presence of bells as a soundmark, but also to the rhythms of urban life and economic activity. Shouts are called “hyperdecibelic practices” and are an identitary trait of traditional populations in the district, among which there is high presence of gypsies (settled in Tarragona since XIII century) but very few immigrants (fact that can be explained in relation to the structure of the city and the concentration of immigrants in ex-profeso districts). Well, as you can see, the study of sound interpretations is just the tip of the iceberg. Sound phenomena are always related to social processes. Another interesting terminology for your readers may also be the distinction between what I call “shared significance habitats” and “shared signifier habitats.” The latter is related to all individuals (with a hearing apparatus, being human or animal) that are exposed to a sound phenomenom, and the former, to all individuals that interpret a sound in a similar way. In a way this is the basis of the research.

4. Finally, maybe you could give us some references, as to texts, authors, movies, websites, etc. where people could find more information about what you are telling us.

There is a lot of them! The first that must be seen is Wim Wenders’ “Lisbon Story,” which is about a sound technician waiting for his movie director, that records sounds and interact with people while waiting. There is a branch of anthropology that can be very useful for people interested in or working with sound, that is the anthropology of the senses. On this website you can find a lot of info.

Regarding sound mapping there is plenty of interesting projects such as Sons de Barcelona, Escoitar, London Soundscape and many more. The only problem I see with those documentary projects is that they do not share specific methodology, which would be very useful for researchers.

There are some interesting authors and labels working with field-recordings as Edu Comelles, Orquesta del Caos, Francisco López, LlorenÁ Barber, Francesc Llop i Bayo, Juan Gil…
And, of course, I cannot end this interview without making some advertising of myself. Most of my music works can be listened here (always work in progress). And my doctoral thesis can be read (in Spanish) here

P.S At the upper right corner of this page you will find the “sound of the week”, which is from Freesound’s user Antigonia, they describe it as follows:

“Concentration for the closure of the Inmigrant Detention Centers in Barcelona, during the International Migrants Day”

…and is part of the Migration Process pack.

← Conserve or accumulate, maybe even share
Mikel R. Nieto and the Amazonas →