Blog Artists Organisations Events Writings About
Welcome to Sounds of Europe, a platform for field recording. The blog of the website will travel to a different European country every month where a local organisation or artist will be responsible for maintaining it. Each country´s particular context and practices with regards to field recording will be explored and presented in a personal way.
BLOG
Conserve or accumulate, maybe even share
12/20/2011 · Jaume

One of the consequences of the growing interest in sound, and particularly environmental sound, is the desire to conserve it or, at least, accumulate it, even also share it.

Often this will to archive sound, goes hand in hand with an implicit or explicit will to conserve -and arise interest towards- some form of identitary trait. Such is the case of this two very similar and enjoyable projects, Sons de Patum which focuses on a popular traditional festival that takes place in Berga; and Paisatge Sonor del Segar i el Batre, dedicated to the process of wheat cultivation. Both of them within Catalunya, the region of Spain from which the city of Barcelona, where I am located, is the capital.

Also, one of the most ubiquitous form of sound archive is that which is presented on top of a geopolitical map -namely the “sound map”- which could also be read as coming from, or reinforcing, through sound, an identity which is thought of as closely tied to the territory. 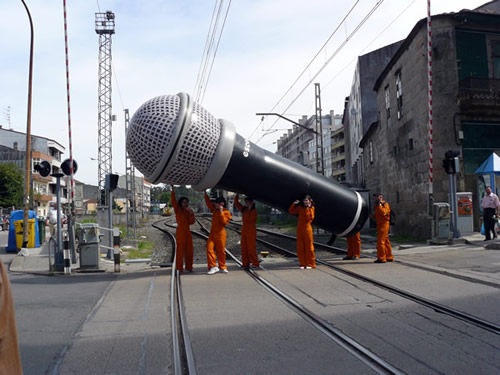 There is no “Sounds of Spain” archive that I know of. But, revealingly enough, two of the most known sound maps of Spain are based on two regions that are quite assertive about having their own distinctive culture. This would be Escoitar in Galicia, and Soinumapa in Euskadi. Both have, along Catalunya, their own languages, which are recognized co-official languages of the country of Spain: Gallego, Euskera and Català, respectively. There are, of course, other interesting and stable sound maps and archives based on territories, as Andalucia Soundscape, or Madrid Soundscape, among many.

But, if something has sparked the interest of “our” phonographers is, indeed, the recent national-wide protests that have been known as “indignados”, or “15 M”, movement. Which has recognizedly influenced other struggles like that of Occupy Wall Street; and which has played an important role in other protests around Europe as the European wide march towards Brussels, which culminated with the October 15th demonstration in the same city.

Recordings of these protests were captured intensively during a short period of time by many people, as if the phonographers had intoxicated themselves with the same enthusiasm that fueled the protesters. Many put up quick archives of these recordings, even a sound map named “Yes We Klang” 🙂 was attempted.

Sonoscop, a project I talked about on my last post, built a small “aggregator”, where you can find links to many of these small archives and recordings. I’ll leave you with that, enjoy, thanks for reading, and see you soon.