Blog Artists Organisations Events Writings About
Welcome to Sounds of Europe, a platform for field recording. The blog of the website will travel to a different European country every month where a local organisation or artist will be responsible for maintaining it. Each country´s particular context and practices with regards to field recording will be explored and presented in a personal way.
BLOG
Listening lessons
04/06/2013 · marcin barski 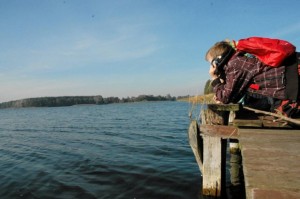 The issue of sound, or rather: music education in Poland is being raised here constantly – usually with a big deal of complaints and disappointment. For many the educational system appears to be weak and – in fact – non-existent. I must admit that when I think of my own music lessons at school back in the 80’s and 90’s, I can’t remember many positive sides of it – but things must have changed since then, I guess, the best example of which would be Muzykoteka Szkolna, a brave and well-done music education web portal sponsored by the Ministry of Culture.

I don’t really want to discuss the empty gaps of the Polish music education system in detail here, this post is supposed to be about people and institutions who took matters into their own hands – and more and more often make an effort to get kids (and not only) to know more about sound, listening techniques, field recording etc. Soundwalks and recording workshops would be the two most important themes in the sound education here and the teachers usually are active field-recordists, sound artists and curators.

Soundmapping of Toruń with Fabryka UTU

Probably the most active institution in terms of field-recording-concerned sound education is Fabryka UTU Foundation from Toruń. For a number of years UTU organizes a series of soundwalks and workshops in the Kujawy region, with a special focus on kids from the rural areas and small towns. Recently their activities started to spread out from the region which is simply a proof of their quality. Almost each workshop has got different strategy and methodology, in many cases the meetings are run by invited special guests (musicians, sound artists etc.). Those activities result in various publications: books, CD’s and online sound maps of the regions. Fabryka UTU’s projects are co-funded by Polish Ministry of Culture and by the local government.

CCA Łaźnia in Gdańsk is another institution open to this kind of educational activities. A series of sound workshops are run and co-curated there by sound artist Krzysztof Topolski, whose works I hope to describe more precisely in another post in this blog. It’s worth to mention that Topolski runs field recording workshops in various locations in Poland, being one of the more appreciated and known artists working in this field here.

One of the more recent projects he was involved in, was the Museum of Sounds project in the National Museum in Kraków. The curators of the Museum asked Krzysztof Topolski to run a series of field recording workshops with kids and to record the sounds of the objects from the Museum’s collection. The visitors of the Museum can listen to those sounds via a special mobile app designed for this project.

Marcin Dymiter, whose work I have described in the previous entry, is also very active in the field of sound education. His workshops (recently for example at the MediaLab in Katowice) include the listening techniques exercises as well as actual recordings, conversations and soundwalks. He points out that in the official music teaching system there’s not much place for listening, which is the most important skill when it comes to sound and music. „Music is about dialogue, communication, understanding and individuality – Dymiter says. – These are the crucial issues in it.” 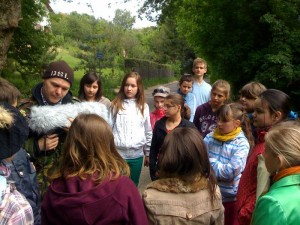 At the workshops with Marcin Dymiter

Of course, the people and institutions described above are just examples, there’s lot of other things happening in this territory. I’m glad to say that the interest in sound education in Poland is constantly growing in recent years. Sound awareness of the curators and artists does play an important role here, obviously, but also the fact that their activities are not left without the public support (even if this support may feel a bit random and irregular) seems to be quite optimistic.