Blog Artists Organisations Events Writings About
Welcome to Sounds of Europe, a platform for field recording. The blog of the website will travel to a different European country every month where a local organisation or artist will be responsible for maintaining it. Each country´s particular context and practices with regards to field recording will be explored and presented in a personal way.
BLOG
Artist In Focus: Marcin Dymiter
04/03/2013 · marcin barski

Marcin Dymiter is a musician and sound artist from Gdańsk. He is well known from his post-rock outfit, Ewa Braun, active in the 90’s, as well as from his solo electronic works as Emiter. Throughout recent years his interests moved strongly towards field recording, first as a source of samples in his electronic music, later as an independent form of expression.

His field recording works include sound mapping (of the Baltic Coast and Prague), a series of „Sound Postcards” albums recorded in various locations in Poland, installations and „Field Notes”, a series of conceptual field recording releases, focused on listening to the natural sounds inside and outside of the urbanized environment. 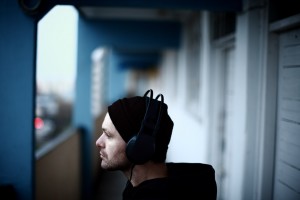 MB: Marcin, tell me about the process of your evolution from postrock and electronic music to the „radical”, unprocessed field recording. What was the most important aspect of that process?

MD: I believe the three main aspects are hidden in my childhood: my early fascination with the „humming” of the radio, me playing all sorts of instruments back then and listening to the natural sounds at the same time. Those sounds were all around me just like landscapes. Finally I started using field recordings and mixing them with other sounds. At the time, though, they were just an addition to the music, a sort of a context, of a complacement, which soon made it to the center of my interests. I am intrigued by the complexity of music, its diversity – a possibility of following different traces and getting into the unknown territory. Field recording is more about discovering sounds – it is a process of thinking, listening, composing and recording at the same moment. For many composers field recording appears to be not enough „musical”. They may be right – the main question here is how do we perceive the role of a composer and of the natural sounds themselves. Why those sounds should be less interesting? On the other hand, a composer becoming a listener of the aural environment makes it a completely new situation. A composer is „a creator” – and a field recordist? He’s just listening and recording… I believe field recording is about immersing in sounds, it’s a good school of listening and gaining some distance to what a composer „should” be.

In your field recording works contrasts seem to play an important role: a city vs. nature, holiday destinations after season… What’s so appealing in them for you?

True, I study something on the borderline between the city and nature. I like abandoned places, the frontiers and the outskirts. But I’m also fascinated with the strenght of the nature, its aural emanations in the least expected locations. The most fascinating moment is when those two worlds collide, when they start their subtle and discrete dialogue with each other. This presence is my main interest. I’m intrigued with how much the sound of the sea is underpreciated by the seaside, it’s a real paradox. Each time I record such places I can see how the nature seeks to underline its presence, there’s always some gimmick which creates an aurally completely different space nearby.

In many interviews or conversations we had earlier you strongly emphasize your interest in the change of listening habits, the change of the listener’s perspective, his lack of time and attention in listening. Is field recording a sort of remedy or rather a relic of the pre-media, pre-digital listening culture?

It is a complex problem, it touches on music and its instruments but also on listening understood as an intellectual practice. Field recording requires a lot of focus, of being „offline”. People of the digital reality won’t like it – for them being offline means foreclosure, the lack of presence. In listening, being „offline” is the best way of immersing in your own listening skills. It’s not a popular statement: silence, patience, humility, ability to wait for a longer while – they are the key attributes of the field recordist, you can’t do field recording without them. I don’t want to criticize the modern listening culture too much but it seems like the idea of an event, of a sudden explosion in the sound matter is currently ubiquitous. Even pop songs should be attractive but only for 2-3 minutes. Field recording requires 2-3 hours, that’s the difference. The study of the sound environment, it’s analysis, is not an easy thing. When I do field recording workshops, people are often disturbed when I ask them to start listening to the world. They ask why? what for? In the begining they often have problems with focusing their attention on keynote sounds or sound signals. I guess partially it’s a result of poor music education.

Could you briefly describe your situation as a field recordist in Poland? Can you see any interest in this practice? Can you get any support for it?

From my perspective, after working with field recordings for 10-12 years now, I can see the situation is changing for better. There’s much more interest in it than, say, 6 years ago. Workshops, meetings, recording sessions are happening more and more often. Obviously field recording is still in the margin of art and education here but the general impression is that things are heading in quite a good direction.

It sounds very much optimistic, thank you.

Read more and listen to Marcin Dymiter’s works at http://en.emiter.org