Blog Artists Organisations Events Writings About
Welcome to Sounds of Europe, a platform for field recording. The blog of the website will travel to a different European country every month where a local organisation or artist will be responsible for maintaining it. Each country´s particular context and practices with regards to field recording will be explored and presented in a personal way.
BLOG
Ruben Nachtergaele / Eutopia
11/20/2011 · julia@q-o2

Ruben Nachtergaele is a sound artist with a background in experimental pop-music. His approach to field recording was in the first place by using them as an inspiration to his compositions, as a ‘comfortable listen’. From there he has discovered more and more interesting structures and textures in them and thus he had them stand more and more on themselves.

Recently he has made some interesting field recordings in the frame of the project ‘Eutopia / The graveyards’ which he guides together with visual artist Filip Berthe.

This project wants to explore the borders of Europe, not in a geographical but rather a mental sense: Europe as an utopia of people who live outside it, in discrepancy to how we Europeans see it ourselves or what it might really be.

For this project they have in the first place done some journalistic research in the four places they want to visit for different reasons: Melilla, a Spanish exclave in Marocco where mostly Africans ask for asylum; Tbilisi in Georgia, a country squeezed between Russia and Europe which was subject to many conflicts in the last decennia. Still to come are Chisinau in  Moldavia, and to end Brussels as the capital of Europe, yet in which for many people the European dream stays unreachable. Ruben and Filip approach this issue by taking in non-events,  every days life, artistically they work in relative independence when they are in situ as the aim is not to make a mere documentary.

In the output of this project sound and image will get together again, combining photo’s with collages of field recordings. In a later stadium it might become an installation, the project being still ongoing. 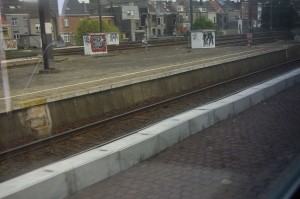