Blog Artists Organisations Events Writings About
Welcome to Sounds of Europe, a platform for field recording. The blog of the website will travel to a different European country every month where a local organisation or artist will be responsible for maintaining it. Each country´s particular context and practices with regards to field recording will be explored and presented in a personal way.
BLOG
SEEING WITH YOUR EARS
03/08/2013 · ciliaerens

The Dutch photographer HANNES WALLRAFEN  lost his eyesight 9 years ago. He became soundartist.
An interview about perception by Eve Keskinnen from VOLTCAFE  October 8, 2011 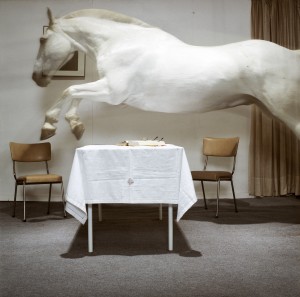 Seeing With Your Ears

Hannes Wallrafen is an extraordinary Dutch photographer who in 2004 lost the sight in both eyes due to a genetic illness. Losing his medium challenged him to think about the importance of eyesight in actually creating something that stimulates imagination and the vision. He calls this visualization ‘seeing with your ears’ which he believes can create a strong visual intensity by the means of sound. Wallrafen feels that the senses are more strongly connected with each other than we think. By exploring the world of hearing and touch, he came to discover how the interconnected senses can form an aesthetic without actually seeing anything. Like Aristotle, Wallrafen uses perception or sensitivity to produce beauty that is intuitive and not foremost observable by the eyes. Wallrafen, unlike other photographers, proves that the meaning of ‘visual’ is not only achieved by sight but also encompasses other definitions such as mental images that can be more vivid than any physical image.

Volt Café: What is the connection between your photography and your sound pieces?
Hannes Wallrafen: Dealing with reality was important in my photography, the world in which I exist and the way I reacted on that through my photos. You are able to make own dream world with photography, but I’m always searching for the connection with reality. When I switched to sound installations that focus didn’t change. When I was a photographer I was not including myself in my creations, it was more about observation. Now in my soundscapes I’m more present. I put more of myself into the sound pieces by, for example, using my own voice. With photography it was about the absence of the maker, and now [with this new medium] it’s about involving [the maker].

VC: How do you capture a decisive moment in sound, like you did in photography?
HW: I don’t necessarily look for that moment anymore but I create it instead. Also, the approach you take must be different simply because of the nature of the medium. If you look at a picture, you can receive information quickly. With sound it is different — you make a deal with the listener. Getting someone to listen is tricky; it demands a lot of concentration from the listener. The difference in photography is that you put parallel elements into the photograph itself. You can put time into a picture, portraying what came before, and what will come after it. In sound you work directly within that time, but then the art of creating sound starts and you start compressing time.

VC: What is the difference between hearing and seeing for the spectator?
HW: I believe that people live in a faster pace. Currently, I’m working on a project in Groningen (city in North Holland) called Theresias, in which I’m trying to change the city into a city of the blind. I turned locations into sound and called it ‘seeing with your ears’ which connected the city by an active sound walk. Each location has a sound piece of five minutes, which for people nowadays is quite a long time. It is a challenge to get people in the right mood, to keep them engaged and wanting to listen. This is the distinction between the two mediums: an image usually makes the viewer reflect on it after seeing it whereas with sound the reaction is more immediate.

VC: Time is obviously something important in your work. Do you think our society’s perception of time is twisted?
HW: Yes, in a way I do. A good example is when you look at the fiction movies from the 1940’s. Most people nowadays start yawning because the time they used for a movie then was much slower, it was more parallel to real time. Today, the film language is faster and more rushed. We have changed in our way of listening and seeing. Time seems to be going at an accelerated speed.

VC: The work you did with VPRO (Dutch public radio) was about making stories in one minute. You worked with trying to make the duration of one minute feel longer.
HW: Yes, that is a good example of how you change time into the opposite again. How you deal with the limitations of one minute, but the time you are using you are stretching.

VC: In these one-minute pieces there is always an edge, a strange twist, a kind of anti-climax. They possess a certain awkwardness. Why do you put these twists into your work?
HW: You take somebody with you on a journey and you play with the phenomenon of expectation. The story is going a certain direction, and then suddenly it turns around. It takes a while for the listener to take that in and they are left with a kind of question mark. So at the end, they stay with a story that they keep in their mind. Sometimes, people tell me that they heard an audio story of mine a year ago and they can still reproduce it.

VC: Telling stories with sound, is this how you describe your work now?
HW: Space is crucial for me; the moment I leave a building, space starts to act as a kind of warning signal. Like being able to hear traffic noise becomes crucial to survive.
I listen to how the echoes bounce off the walls to get an impression of the space. From that point of departure, I work with sounds and soundscapes that deal with that kind of awareness of experiencing space. It allows me to experiment with the distortion that our senses sometimes create.

VC: I read a beautiful quote of yours: ‘Sometimes you are blinded by your own eyes.’ What did you mean by that?
HW: Your eyes are an instrument that you are very much influenced by.  When I can’t see you, I’m not distracted by your appearance. What is left for me, is your voice. That’s what I’m talking about.

VC: How has changing your focus from seeing to hearing changed you as an artist?
HW: Changing mediums obviously affected my work, which is evident when I look back upon my photography. Back then I was 100 percent visually orientated. Even though I incorporated some different mediums, like sound in my photography, they always acted as supporting factors to the image. After I lost my sight, I realized how many qualities exist in those other senses. The sense of hearing, touch, smell, taste and the sense of being present.

VC: How do you think fashion can benefit from integrating other senses, instead of relying so much on the visual?
HW: For me fashion is about the touch and the material. I love to touch different textures. I always wear fabrics with an interesting feel.

VC: What would you describe is the sixth sense?
HW: It is the sense of being aware of being present. Being aware of actually being. You can feel your surroundings if you concentrate. At times you can describe it. Like when somebody is standing behind you.

VC: What do you think is important in a space?
HW: As I’m entering a building, I am very aware of the acoustic qualities of the interior. I hate spaces that are made from marble or stone, because the space echoes like a swimming pool when there are lots of people together. It is an example of architecture where not enough attention has been paid to sound and acoustics.

VC: I read somewhere that people who live in windy countries are much more irritable than people who do not…
HW: That is an interest of mine: how people deal with space and the soundscape. I get anxious in buildings I don’t know from my seeing times. I experience this anxiousness, not only because of the technical aspects of the space (like the size), but also the aesthetics of the building.

VC: Talking about aesthetics and the aesthetic of sound: what do you consider the most beautiful sound?
HW: It is a crow, which I used in many of my sound pieces. It creates such beautiful distance for me: the high frequency sound starts far, far away, eventually reaching you, and then soon disappearing again. It is not the fact that it is a crow, but the fact that there is something creating that space.

VC: Are you or your work influenced by the time when you were still able to see?
HW: There are images inside my head. All the images and experiences from when I was living still strongly influence my work. My dreams every night are filled with sighted worlds, which I can really describe, they are like photographs, like little films. But when I sit here now, awake, I cannot imagine it as a picture. I imagine it as the description of a picture. That is the difference for someone who is born blind: they are not able to tell what something looks like. They can still visualize but from a different starting point.