Blog Artists Organisations Events Writings About
Welcome to Sounds of Europe, a platform for field recording. The blog of the website will travel to a different European country every month where a local organisation or artist will be responsible for maintaining it. Each country´s particular context and practices with regards to field recording will be explored and presented in a personal way.
BLOG
ALICE IN AUDIOTENLAND
03/10/2013 · ciliaerens

Field Recordings in the dance performance Alice in Audiotenland for children 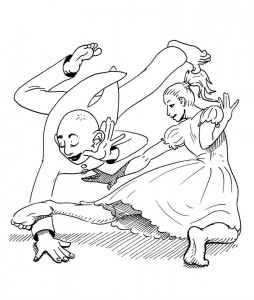 Last year, for the yearly Sprookjesfestival (Fairy Tales Festival) in Arnhem, I worked with two choreographers and dancers, Eline van Ark and Barbara Ebner, together with visual designer Tijmen Brozius on the dance performance for children, Alice in Audiotenland.

When the choreographers came to me with their project RADAR – ongoing artistic dance research about listening and the impact of sound on the body – and the desire to make a version of this performance suitable for children, it became clear to me that the “Curiouser and curiouser!” sounds would need to come from the very city where the piece would be performed. 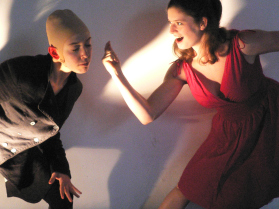 In Alice in Audiotenland, Alice finds herself in the strange world of the Audioot. In this world it’s all about sound. The Audioot (Audiobot) responds to sound, which delights Alice. However, every time she thinks that she understands what is going on, the Audioot challenges her again to dive deeper with him into the world of sound. At certain points in the interaction, the Audioot literally takes the situation into its hands and washes Alice in a fantasy world of sounds: a gesture releases one of the compositions of mine containing sounds from the very environment in which the children have grown up, but in new juxtapositions, sweeps, intensities and reversals. The Audioot needs to teach Alice how to move and feel at home in this strange world… with the eyes shut. The sounds, uncanny, sometimes recognizable, sometimes abstract, are intended to awaken the children’s ears and stimulate their curiosity about their sounding environment. 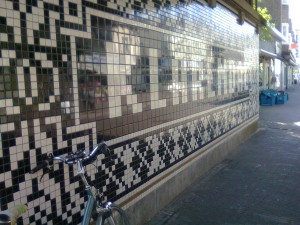 Tunnel under the rails, with ‘Karendal’, the name of an Arnhem neighborhood (May 2012)

Sharing a love of listening

In my many years of teaching music to children, it has become more and more clear to me that my primary motivation is to share a deep enjoyment of listening with my students.

Certain magical moments arise in my mind’s ear. Moments when, having removed the front panel of the piano to expose the strings, and arming the student with a mallet and/or small glass bottle, they began to mesmerize themselves and me with the sounds they produce. Rapt, sustained attention to a single growl of the thick bass strings, following the texture of sound to the last moment as it slowly thins and fades away. Enthralling us in the patter and tick of wood on metal string, our ears catching each minute variation, the timbre of each attack and decay.

At some point, inspired by various writings of Murray Schafer, I decided to do Soundwalks (Luisterwandeling in Dutch) with my students. They received the preparation assignment of sitting somewhere for 10 minutes and writing down all the sounds they could hear. Some even mentioned the sound of their own writing! Then one morning, we came together, walking as a group (no talking!) to different locations in the large central part of Arnhem, Park Sonsbeek, listening and working out various responses to our listening: drawing, writing poetry or graphic notation depiction our sonic environment. Once again it was a privilege to share moments with children completely absorbed and engaged with the sounds around them.

My involvement with Deep Listening®

Humans, like most primates, are extremely noisy animals, with a proclivity towards surrounding themselves with audible or mental chatter. Reducing the chatter in order to better listen to my environment has been one of my regular practices since 2005, when I discovered and became involved with Deep Listening®, the lifework of Pauline Oliveros. Oliveros distinguishes between hearing: the continual mechanical response of our ears to every sound around us, and listening: the awareness or consciousness of those sounds resulting when we direct our attention toward what we are hearing. (See my article Listening to Deep Listening in the Journal of Sonic Studies, Vol. 2, 2012.)

One moment toward the end of a five day Deep Listening retreat held in Cork, Ireland, 2008, stands out in my memory. Verbal communication had been reduced to a couple of hours during the day, and we had engaged in hours of bodywork, listening meditations, and performing and composing listening scores. I was sitting over the River Lee, observing my environment, when my perspective shifted. All the sounds and movement around me – which my old habit was to ignore while I was engaged in ‘thinking’ – suddenly seemed to come out in sharp and vivid detail, forming a fascinating ‘schouwspel’ and ‘hoorspel’ for my delight. A large crane flapped down for a few moments on the rock in front of me, eyeing the water, perhaps for food. The sounds of traffic ebbed and flowed and entwined with the sound of the laughing water. The glorious symphony of sound, light and motion came, not through any change in my environment, but through the act of giving relaxed, open, absorbed attention to my environment. 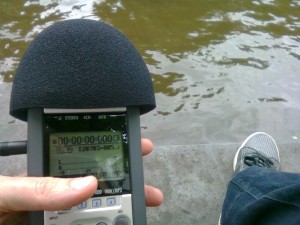 Recording by the canals in Amsterdam (July 2012)

I have not been making field recordings very long, but it is clear for me that recordings of my environment will become central to my compositional work.

Walking with a hand-held microphone and headphones has, for me, the strange double working of isolating me in my environment while at the same time heightening my listening to my environment. Perhaps through the focus and intensification of sound coming to my ears, the information from the other senses seems to be reduced, allowing for a more auditory-led engagement. There is something also rather theatrical about the act of recording the environment, and I notice that I have even started to develop a choreography of recording motion, with smooth, slow motion, sweeping gestures of the arms and turns of the body.

The hums and partials of an escalator motor in a tunnel, the complete change of reverberation/acoustic space as you turn the corner of a street, the sonic transition from city sidewalk to park path, the sounds of geese raising the alarm, gates squeaking… these sounds from the city where I live, the musicality of this city, and my role as participant and listener are all experiences that I long to share.

Children will grow up in an ever-changing mix of human-made, natural, chosen-for and not-chosen-for sounds. Children will grow up with many choices involving listening to their environment or putting on their headphones, transporting themselves in noisy or quiet vehicles, walking through the streets talking on the telephone or perhaps mixing a virtual sound world with the physical one around them.

While it is not my desire to give answers, I do hope to share the pleasure and pains of remaining open to the sounds around us, as well as to the possible creative impulses that can come from deep listening to everyday sounds. Sharing a thorough enjoyment and engagement with our sonic environment.

Sharon Stewart
www.handsonpiano.nl
← SEEING WITH YOUR EARS
A little bit of background →