Blog Artists Organisations Events Writings About
Welcome to Sounds of Europe, a platform for field recording. The blog of the website will travel to a different European country every month where a local organisation or artist will be responsible for maintaining it. Each country´s particular context and practices with regards to field recording will be explored and presented in a personal way.
BLOG
Sound Stories from the Baltics, Felicity Ford’s artist residency in Estonia
06/26/2012 · John Grzinich 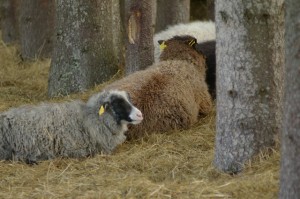 During May 2012, I undertook a residency at MoKS with the creative aims of deepening my knowledge of the Estonian Wool Trade, and extending my sonic explorations of the relationships between textiles and places. The residency was conducted under my wool/sound project banner title KNITSONIK™, and was co-organised by MoKS, and funded by the British Council, Estonian Ministry of Culture and Cultural Endowment of Estonia. I bought sounds and material artefacts from the British Wool Industry to share, and I collected sounds and material artefacts from the Estonian Wool Industry, theming the residency around the idea of a cultural exchange. 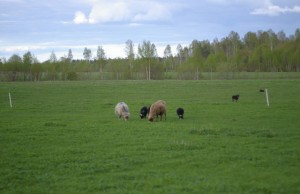 I had a list of objectives for May, the last of which was “to explore new ways of combining my interests in wool, knitting, and sound”. Wool, knitting and sound don’t seem obviously connected on first glance, but the very quiet act of knitting is a wonderful accompaniment to listening to field-recordings, and hand-made woollen garments with inbuilt systems for dealing with trailing wires are both warm and practical for the field-recordist! However, what I realised in Estonia is that I am most interested in how phonographic praxis can document precisely where textiles come from – evidencing the fields, factories and communities which produce them – and in using sound-recordings to imbue the practice of making clothes with memories, relationships, narratives, and a sense of place. This localised and specific approach is a kind of antidote to the anonymity of mass-production, and as my interest in the provenance of my knitting yarns has increased, so has my excitement in being able to document that provenance in sound. I believe in the power of sound to evidence place, texture and surface more than any other medium, and I love the affinity between the slow-time of growing wool and the slow-time that listening and editing require. My projects often connect material culture with sonic creativity, and in Estonia I dug beneath the surface level of knitting which one encounters in Tallinn’s touristy areas, and out into the living landscapes where Estonian wool is actually grown. Estonia is internationally renowned for its distinctive needlework traditions; I wanted to get into the ground which these traditions hail from, and to record its textures and specificities. 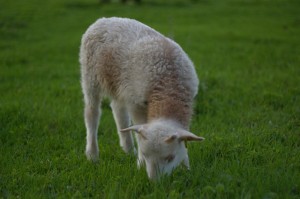 Perhaps the closest I came to achieving that aim was when I stayed with Joel and Julika Roos on their working sheep farm in Pärnumaa. Jaani Talu has a few paddocks, a barn, a small, forested area, and a wide variety of livestock including Åland, Swedish Finewool, and Estonian Native, sheep. Julika is a member of Hea Villa Selts (The Good Wool Society) and I spent some happy hours being shown by her how best to process the different, characteristic fleeces of the various sheep breeds on the farm. Spinning, carding and combing the fibres, I got some sense of the texture and creative possibilities of each distinctive fibre-type. Also, whilst on that farm, becaue Joel and Julika were so supportive of my project, I had some wonderful opportunities to experience the sonic qualities of their flock and to make recordings around their farm. Hanging microphones near the haystack, I documented the specific ambience of sheep lying around in the shade and munching hay; the distinctive bleat of a pet-lamb; and the morning cries of a pair of cranes, whose sounds are a beloved, familiar, sonic feature of the place to Joel.

The specifics of a place can be hard to document if you don’t know where and when to listen, but Joel’s description of the cranes and his knowledge of local terrain and when they call enabled me to make this last recording. In being guided by him to where the cranes were, and in sharing in his delight at their morning calls, I felt I was hearing a really specific detail in a soundscape where wool is growing; a sound that matters to a shepherd; a sound which I’d never hear in the pastures and meadows of Britain; and a sound to connect with the very specific wool of the Native Estonian Sheep which I spun while I was staying on Jaani Talu. I will always connect the yarn I made there with the sound of the cranes, because both things originate in the same place. Hunting for sounds and meeting the sheep gave me the sense that very briefly, I was in touch with that.

Felicity Ford is a sound artist, researcher and avid knitter from the UK. More information about her work can be found on her website The Domestic Soundscape.