Blog Artists Organisations Events Writings About
Welcome to Sounds of Europe, a platform for field recording. The blog of the website will travel to a different European country every month where a local organisation or artist will be responsible for maintaining it. Each country´s particular context and practices with regards to field recording will be explored and presented in a personal way.
BLOG
Sound Stories from the Baltics, the biological perspectives of Veljo Runnel
07/02/2012 · John Grzinich 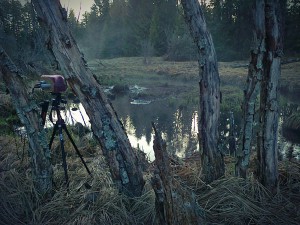 Veljo Runnel is an Estonian biologist who has been researching and recording nature sounds for over 12 years. Much of his work involves mapping habitats through sound and he maintains an online archive of Estonian nature sounds at www.loodusheli.ee.

Close and intimate with nature

Estonia is often said to be a pristine country with plenty of nature and peaceful countryside scenery. For the nature sound recordist it still demands effort and and planning to get a “wild” sounding recording. There are airtraffic corridors, roads, farm machinery, foresters, holiday bass-pumpers or natural forces – wind, rain, mosquitoes… In southern Estonia along the border with Latvia there are many interesting natural habitats which have good placement regarding nature sound recording – distance from major roads, sparce settlements and no big farms and what’s most important – rich bird life.

One of these areas lies near Koiva river. Koiva (or Gauja in Latvian) flows many kilometres between Latvia and Estonia. I have been there several times and enjoyed the spring morning bird choruses and owls’ hooting in the night. For several years I thought of making a longer early morning recording by the Kirna brook which heads into the Koiva river. The brook runs in a small valley through the forest, with fallen trees and dense shrubbery in places making it look really wild.

A couple of years ago the beavers had a dam built there and a large area was flooded. Now the beavers have gone and dam has been demolished but the place still looks wild. In the end of April I took three days to spend in the area and to make the recordings I had long been planing. In the evening of first day I patrolled the brookside to see the signs of animal activity and find a good place for my microphones. Finally I decided for a spot just by the water’s edge where the muddy shore had many bird tracks. There was also a tree stump nearby (inviting woodpeckers). At 5 A.M. in the morning I headed to the selected place, set up the microphones, hit the record button, and then left the area for 1,5 hours.
When I was listening to the recording, I discovered that the place wasnt so wild after all. A small household half a kilometer away had a cow who started to „sing“ along with birds at sunrise. The road which was 5 km away also contributed to the recording with several early morning cars. But still the recording had many enjoyable moments. A bird was shuffling in the leaves and moving in shallow water just near the microphones. Another bird was taking off from the brook (probably after spotting the tripod). And after all, the cow’s mooing sounded pretty funny in forest soundscape.

Here are some of the exerpts from a 1,5 hour recording:

Recording nature sounds close-up without interference from recordist is difficult, sometimes even impossible. There are species, which are more sensitive to smell, others become more wary when they see unfamiliar objects; human presence itself is most scary to wildlife. Nature photographers and filmmakers use habituation – they build a hide in a place where animals regulary move, have nests or playing grounds. Animals are first cautious near the hideout, but when days and weeks pass, they get used to it and sometimes even take advantage of the hide as a lookout point or sunshade. Of course, if there are people in the hide, they must keep a low profile when animals are around. Strange noises and movement of lenses in the hideout openings can still scare the animals.

For this recording I set up a tent near Black Grouse’s display ground in forest clearing. Next morning a single bird showed up and started to call not far from the tent. I was pretty happy with the recording, although it doesn’t present the „real“ grouse play with many birds hissing and jumping around on the bog terrain. What makes it special, is the acoustic surrounding, forest clearing acting like an arena, causing reverberation.

Sometimes I just want an atmospheric recording with a feeling as if the listener is in the middle of the animal life, without looking for specific target or sound. When I dont have much time to prepare for the recording, I just go by a hunch. Old treetrucks with signs of woodpecker activity, muddy banks of a river inlet with lots of animal tracks, forest boundaries – I look for the „hotspots“ to set up my recording gear and leave it there without any human presence. The timing is important – if I have limited recording time, the recording must be started not too long before the predicted activity. Many animals are more active around the sunrise, especially birds. Listening to these „random“ recordings will sometimes reveal enjoyable little acoustic details. Here is an exerpt from a recording made by a brook. There is a bird (or birds) rustling in the grass, flying shortly and moving in shallow water. Then another bird is trying to land in the brook but immediately takes off, probably scared by the look of tripod.

← Sound Stories from the Baltics, Felicity Ford’s artist residency in Estonia
Fieldrecordings from the European Capital of Culture: Maribor – 2012 →