Blog Artists Organisations Events Writings About
Welcome to Sounds of Europe, a platform for field recording. The blog of the website will travel to a different European country every month where a local organisation or artist will be responsible for maintaining it. Each country´s particular context and practices with regards to field recording will be explored and presented in a personal way.
BLOG
Sound Stories from the Baltics, Intro
06/06/2012 · John Grzinich 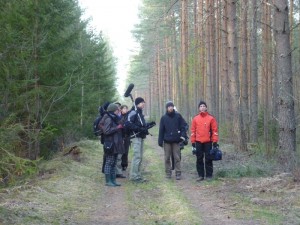 The focus of the current set of reports is on the Baltic states. For those who don’t know the Baltics are a set of three nations comprised of Estonia, Latvia and Lithuania. I’d say the term Baltics is a lose one, referring more to a geographical locale (bordering the Baltic Sea) than a specific common identity, as each Baltic country has its own particular manners and culture. In my 10 years of living in the Baltics, I have frequently visited and come to know not only Estonia where I live but also neighboring Latvia and Lithuania more to the south. This includes the geography and landscapes of these countries (where my main interests in sound lies) as well as a small number of artists and researchers who work here.

My aim over the next few weeks is to give a voice to those living in the Baltics who have an active interest in sound and listening, and work primarily with field recording in some form. Rather than profile people myself, I want them to tell in their own words about their interests in sound and particularly about “stories from the field”, to relay experiences of hunting for unique sounds and sound environments simply for the sake of gathering material or for developing a particular work.

A short primer on Estonia should include MoKS, an artist-run initiative that has been active in the rural south for over 10 years. Much of my involvement has focused on organizing sound based events and workshops and bringing sound artists into the local context. One of my favorite events was the Nature Sound Recording workshop led by biologist Veljo Runnel (whom we’ll hear from) who shared his extensive knowledge of nature sounds and more then 10 years of hunting sounds in the wild. MoKS also holds a monthly event called Helikoosolek (translates as “Sound Meeting”) at the Estonian National Museum and is hosted By Patrick McGinley of Framework Radio. Helikoosolek intends to showcase the work of artists, researchers, scientists or just about whoever has a keen interest in sound and foster discussion about sound with the local public. MoKS was also the co-organizer ofTuned City Tallinn held last year in the frame of the European Capital of Culture. For this we worked closely with Carsten Stabenow (featured in the last post) for over a year to develop the concept in the local context of Tallinn, Estonia’s historic capitol.

Numerous field recording based compositions and CD releases have come out of MoKS residencies, too many to name here. A few of the more recent releases that come to mind are “Lind, Raud, Aastaajad” a project intitiated by Yannick Dauby after his residency in 2005 which ended as a collaborative CD with myself and Murmer. Another recent one is “Estonian Strings” by Jez Riley French, a collection of recordings made in May of 2009 around MoKS.