Blog Artists Organisations Events Writings About
Welcome to Sounds of Europe, a platform for field recording. The blog of the website will travel to a different European country every month where a local organisation or artist will be responsible for maintaining it. Each country´s particular context and practices with regards to field recording will be explored and presented in a personal way.
BLOG
Sound Stories from the Baltics, the ‘Drift Ecology’ of SALA
06/12/2012 · John Grzinich 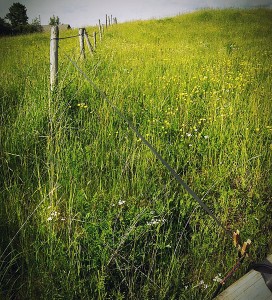 SALA is the project name of recordist and composer Audrius Simkunas who is based in Northeastern Lithuania. I first came across his recordings through his continual (and wonderful) contributions to Radio Aporee. SALA’s work confirms my belief that there is no center to the community of people interested in sound across Europe. His in-depth investigations of his town and surrounding areas shows there is endless sonic potential in what lies in everyday findings. I asked SALA to share some stories from his work and he was kind enough to talk about his practice of “Debris Ecology”.

On my knees, armed with a recorder, headphones and mikes I explore the debris that people have left behind, – a clown-archaeologist fascinated by sonorous dimensions of trash. Barely heard rustlings and scratchings of insects and earthworms in the pile of last seasons scrap-heap left by happy tourists’ families, torn fish-nets shamelessly dropped on a young juniper, a coil of rusty wire whistling in the wind, an ant crawling through the empty beer can laying on the forest path, a sheet of cardboard catching sporadic drops of spring’s light rain, plastic bottle beating at the shore of the lake, worn tires in a ditch near the village byway, half-charred remains of unknown metallic utensil in an abandoned campfire, spare parts of a car nearly buried in the earth, intoxicated fly buzzing inside empty soviet ammonia tank, strapping tape wailing in wind…All these and more are DEBRIS left by people, made by people and forgotten by people in the landscape. I listen carefully. Some of them speak through distinct sound, others are almost inaudible and may be heard only through subtle vibrations caught by contact microphones. And they are all characters of my ongoing sound project “Debris Ecology” – the phonic study of junk found in landscape and  resonating in soundscape. The idyl is broken…

“I detest your Mammon. Disease partakes of your wealth. Having acquired, ye know not how to spend.” (Austin Osman Spare “Anathema of ZOS”)”

Further examples of SALA’s work can be found on his soundcloud page and blogspot page.