Blog Artists Organisations Events Writings About
Welcome to Sounds of Europe, a platform for field recording. The blog of the website will travel to a different European country every month where a local organisation or artist will be responsible for maintaining it. Each country´s particular context and practices with regards to field recording will be explored and presented in a personal way.
BLOG
SOUNDTRACKCITY
03/03/2013 · ciliaerens

Since 2008 there’s an organisation in The Netherlands that actively develops and promotes the soundwalk as an independent discipline (next to cinema, theatre or visual art). SOUNDTRACKCITY was set up by two artists: Renate Zentschnig, theatre maker and Michiel Huijsman, visual artist. What inspired them to do this?

Cilia Erens: How did Soundtrackcity come about?

Renate Zentschnig: I studied theatre and have been making theatre productions since 1992. Each of my pieces is an attempt to break open the classical theatre and to encourage the audience to make new connections with the world outside. The pieces are often site-specific and often the players are not actors but ‘real people’ who tell stories about their own lives. Since 2002 I’ve made a number of soundwalks in collaboration with a.o. Justin Bennett and Evelien van den Broek. I discovered that the soundwalk is a relatively under-developed media-form where there is still a lot of possibility for experiment. I wanted to establish a structure where colleagues from theatre and other disciplines could work together on soundwalks and develop new forms for them. At the same time, it seemed essential to create the conditions for the optimal public presentation of this work. Soundtrackcity came out of this personal ambition.

Michiel Huijsman: We are interested in the city, and see the city as the materialization of ideas. Ideas of planners, architects and urbanists, but also and maybe more so, the ideas of inhabitants, visitors, ramblers and other temporary passers-by.
We are guided to our locations by our attraction to areas in transformation. An area that has recently changed or that is on the threshold of a coming change, such as a radical urban development project, has a field of tension that can be felt and heard.
We have good experiences with the method of inviting two artists from different disciplines to work together on a soundwalk. We look for artists who are socially engaged and who can work with people and material that has a direct relationship with the area crossed by the soundwalk.

C.E. Which projects are you working on now?

R.Z.: At the moment we’re working on two new soundwalks in Amsterdam and one in collaboration with Worm in Rotterdam. This coming year we want to expand our network, meet new artists and start up new collaborations. We want to do more research and make smaller, short-term sound projects that don’t necessarily have to become soundwalks. Our dream is to work with people from different neighbourhoods in Berlin to investigate what the soundscape of their city means to them and how they themselves can influence it.

C.E. Can you say something of the experience of the soundwalker? How do you see your audience?

M.H.: Art institutions are driven more and more by the concepts of product and consumer. Art must be served up in bite-sized pieces to the largest possible group of consumers. But it is an fallacy to address your audience only as a consumer. Then art can only function at best as distraction or spectacle. We resist this impulse, expecting an active, sometimes even investigative standpoint from our audience.
Take the soundwalks that we produced in collaboration with the IFFR in Rotterdam. Visitors to the film festival were summoned to leave their comfortable seats in which they usually consume images and, instead, were asked to walk the streets. There they could create their own subjective experience of the city by bringing two parallel worlds together; the real urban situation that enters their consciousness through touch, sight and hearing (our soundwalks use semi-open headphones that let the surrounding ambient sound through) and the sound composition that is played during the walk. The creation of one’s own subjective experience is not free of engagement. I’d like to finish with a quote from Raviv Ganchrow, architect/sonologist, who we invited to experience one of the soundwalks before the seminar Soundtrackcity Rotterdam: The City as Sound :

“The experience of such superimposed hearing, i.e. hearing the playback as well as hearing events in an immediate surrounding, creates a heightened awareness of ones own self presence in an embodied field of listening. The experience calls into question presupposed ‘objective qualities’ of ‘place’ by reconfiguring the very same atmospheric attributes seemingly comprising those places in the first instant. The result is not so much a distortion of ‘real place’ as much as it is a momentary awakening from the slumber of every-day experiences. It creates a sobering moment in an otherwise ongoing stupor, by denaturalizing the ‘real’ and allowing it to begin working against itself.” 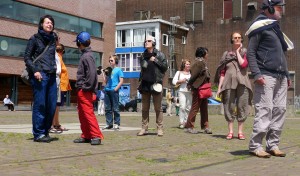