Blog Artists Organisations Events Writings About
Welcome to Sounds of Europe, a platform for field recording. The blog of the website will travel to a different European country every month where a local organisation or artist will be responsible for maintaining it. Each country´s particular context and practices with regards to field recording will be explored and presented in a personal way.
BLOG
ON FIELDRECORDINGS
02/28/2013 · ciliaerens

curiosity did nothing to the cat – miniature 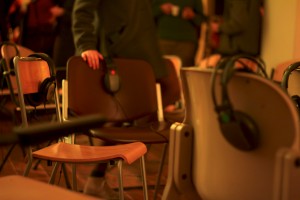 I started recording sounds as part of my education in film studies. When I realized I wanted to specialize in sound design for film, I had begun to understand sound’s potential to actively tell the story. I was especially intrigued by the possibility of sound to do it autonomously, instead of only making a contribution to the understanding of the image. I was still a film student when I did my first acousmatic project. Back then I had no idea that going to a place with sound equipment was considered a practice and called “field recordings”. I went to the Lisbon flea market called Feira da Ladra with the usual sound gear for a film shooting. Only this time there was no camera crew. There was only the microphone. At that time, I was familiar with solo recordings as part of designing sound for film, because of a very important part of sound post-production in film: the foley.

The foley process consists on recording in studio certain sounds that were missing or could be added to the track. These can be sounds of actions that for some reason were not recorded in the set, or that could use enhancing. In general, there are two ways to proceed: one follows the image and records the actions in sync with the timeline; or one has to go to the field and record certain objects that cannot be carried out to the studio. Eventually, I was going to the flea market with this in mind, so to say, doing foley to a timeline. But the image didn’t exist before the sounds and therefore these could definetely guide the timeline.

It didn’t take long until I realized that telling a story by means of sound was not very concrete. Initially, I based my use of sounds on the idea of documenting a place/space. The document could achieve a realistic form, most likely an edited soundwalk; or, perhaps, I could fantasize about the places/spaces and therefore present to my audience a little fiction about it. Sometimes, that could even imply improbable combinations. Occasionaly, these combinations would be extremely surrealistic/abstract.

For the past six years I have been interested in the concept of soundscape. Whether or not one might initially think of a series of keynotes that compose our sound environment, I enjoy emphasizing the possibility of narrowing these keynotes down towards the idea of site specificity. Along the way I developed a sharp interest for sounds that do belong to our soundscape but are usually too embedded in our daily life to be noticed.

For instance, when I started the master program at The Institute of Sonology, I decided to do a piece with sewing sounds. Not only sewing machines, but all the sounds and movements that are part of that world. Also, I had the intention to bring on the idea of sound documentary, sound fiction and sound liberation – just as I had done with the “feira da ladra”. I meant to initiate a discussion on these concepts in order to clarify what a soundstory could be. At some point, I thought that these different approaches to the same sounds could use different strategies of presentation, such as different arrangements of loudspeakers in order to clarify the listening proposal. From this exercise, I understood that the idea of soundstory is far from convergent. Foremost, I realized that the presentation of these sounds was as important as how I chose to record and edit them.

From that moment on, I start my process by choosing how to record my sounds. I usually use sounds that belong to my social environment and according to their characteristics I choose what kind of microphone will capture the best of it. Part of my writing process is to choose the number of speakers I will use to present the story, and their arrangement. Each speaker has a specific mission. It is in the communication between the loudspeakers that the possibility of a happening lies. Eventually that arrangement becomes crucial to the specificity of each piece, and it cannot be otherwise. I usually collect the sounds that make me curious of their nature – and by nature I mean the discovering of their process and own growth. Slowly, a group of sounds starts to form. I tend to not reveal their sources/names to my audience, because I do enjoy the fact that they become something else in their minds. I record everything that intrigues me: the sound of bubbles in a soda, the sound of a cat purring. Ultimately, it is not a cat purring if the audience does not recognize it as such, and it is a not a soda if I don’t call it so. These sounds are performers and become part of an act. For this idea of acting, it is a great contribution to use several speakers and to position them strategically. For example, in my last piece I had a set of 7 small speakers under the audience seats. In this piece, I wanted to make very clear that the audience is the stage of stories. Some other piece, I’ve used an arrangement of 4 loudspeakers combined with headphones. Again, I wanted the audience to feel inside the actions. In this case it was mostly to commit the body to the listening experience.

From the very first moment I am recording a sound, I am positioning a fiction, a performance. The same way I choose how to point my microphone, I should choose how to point the loudspeaker. Eventually, my listener has a role in this ficitonality too, because every sound comes from an existent soundscape. I don’t do extreme processing or modifications –things shall at least remain tangible enough to be understood. It is all, so to say, indigenous sounds. One can, if culturally or socially familiar with the context, imagine what is happening – because one has heard those or similar sounds before. In my point of view, sound fields carry and imply two main things: organicity and subjectivity. In my field recording practice, I think of field as everything “out-there and right here” and of soundscape as any sound that is in it. And then there is the culture-specific for the work. Radio pieces, concert halls or galeries will change what the sounds evoke. For that reason, I think of field recordings as a practice of dramaturgy.

photo by Stephan Kaffa at Studio Loos, October 2011
← SOUND OF THE NETHERLANDS
SOUNDTRACKCITY →