Blog Artists Organisations Events Writings About
Welcome to Sounds of Europe, a platform for field recording. The blog of the website will travel to a different European country every month where a local organisation or artist will be responsible for maintaining it. Each country´s particular context and practices with regards to field recording will be explored and presented in a personal way.
BLOG
The Irish Sound, Science and Technology Association (ISSTA) Convocation, Cork, August 1-2 2012
10/02/2012 · Sean Taylor

The Irish Sound, Science and Technology Association (ISSTA) held its second annual Convocation on August 1-2, 2012 at the Cork School of Music and St. John’s College in Cork.
ISSTA is an Irish based resource organisation that showcases and brings together practitioners integrating fields of music, sound, science and technology based on the island of Ireland. It serves musicians, researchers, scientists, engineers and artists by promoting art, music and research in Ireland, and outwardly to an international community/audience.

The four categories featured at this years convocation included; Musical Works, Sound Art/Installations, Academic Papers/Posters and Workshops.
Submissions for this year’s open section were asked to respond to the following brief: Noise has become ubiquitous in most of our lives. As listening is an imaginative activity, so noise is a cultural construct, and has always been a presence in our music, communication and environment. From Russolo to the post-digital arts, noise has been increasingly accepted into the realm of artistic practice as valid and evocative material. This Convocation will draw upon both science and art, theory and practice, in exploring these spaces and focuses on how contemporary science and technology affects the concept of noise. The open submission categories were reserved for compositions or performances intended for a concert hall paradigm, which took place at the Cork School of Music. The selected musical works had to include science or technology in some way. The composer and/or performers had be Irish or based in Ireland. Examples of acceptable submissions that were included:

Some photos from Robin Parmar.

Further details of the programme and events from this year’s convocation. 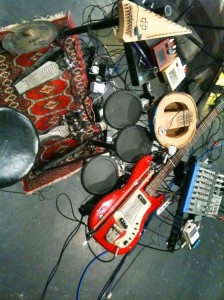 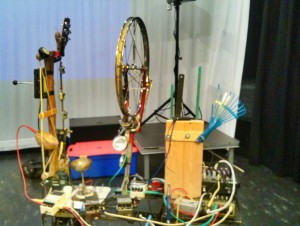 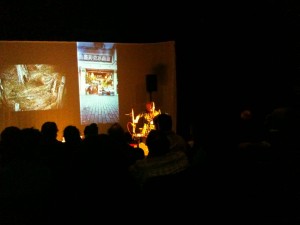