Blog Artists Organisations Events Writings About
Welcome to Sounds of Europe, a platform for field recording. The blog of the website will travel to a different European country every month where a local organisation or artist will be responsible for maintaining it. Each country´s particular context and practices with regards to field recording will be explored and presented in a personal way.
BLOG
SOUND OF THE NETHERLANDS
02/25/2013 · ciliaerens 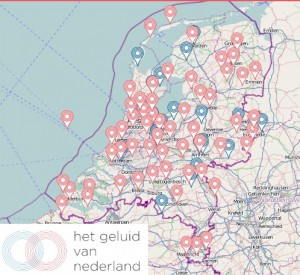 A nice way to involve the ears of Dutch people themselves in archiving the sound of the Netherlands from the past, the present and the future:

Sound of the Netherlands
by Marloes Kunst

The project ‘The Sound of the Netherlands’ makes the ‘own recordings’ from the unique sound archive of the Netherlands Institute for Sound available online for (creative) reuse, research and the broader audience that is just interested. This collection consists of more than 10,000 sound recordings from the 1950’s to the 1990’s, of which 2,100 sounds are now made available online. Everyone can complement this collection with his of her own recording by uploading sounds on the website and with the app for the i-Phone and Android devices. This mix of historical and new sounds creates a unique collection of sounds that gives insight into the changing sound of the Netherlands.

Crowdsourcing
The aim of The Sound of the Netherlands is to make ‘disappeared’ sounds accessible through putting them online for a broad audience and furthermore, supplement this collection with (new) recordings from the ‘crowd’. All sounds, including the new recordings that can be uploaded on the website or with the app are available for reuse under the Creative Commons Attribution-Share Alike License (CC BY-SA). This license gives professional and amateur sound designers, media artists, producers and other interested parties explicitly consent to the sounds for reuse and distribution, as long as they mention the origin of the sounds and share new creations under the same conditions(CC-BY-SA).

Research & reuse
The online availability of the sound archive and complementing it with ‘crowdsourced’ recordings illustrates how the ‘tone’ of the Netherlands has changed over time. This could be interesting for historians and researchers, for the website can be understood as a ever evolving collection of the development of typical Dutch sounds from the middle of the last century onwards. In addition, the sound archive, complemented by the new sounds from the ‘crowd’ is also interesting for (creative) reuse, for example in new audiovisual productions.

← THE DARK UNIVERSE
ON FIELDRECORDINGS →