Blog Artists Organisations Events Writings About
Welcome to Sounds of Europe, a platform for field recording. The blog of the website will travel to a different European country every month where a local organisation or artist will be responsible for maintaining it. Each country´s particular context and practices with regards to field recording will be explored and presented in a personal way.
BLOG
Zeppelin: Sonidos en Causa – Ciudades en Red
12/12/2011 · Jaume

Past Saturday was the last day of Zeppelin, a sonic projects festival which has been running since about year 2001. 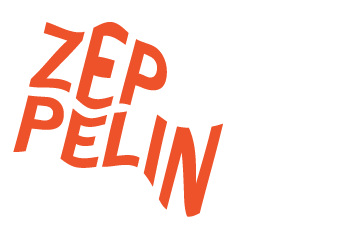 Zeppelin is organized by Orquestra del Caos “an interdisciplinar collective of artists, particularly oriented towards development of projects related to Experimental Music and Sound Art” whith José Manuel Berenguer and Carlos Gómez as its core members.

One relevant effort of Orquestra del Caos is “Sonidos en Causa“. Which is a project devoted to record and preserve the sonic heritage of a number of Latin American cultural contexts in which, due to economic growth, irreversible enviromental changes are taking place. Here you can access its streaming page. Another day I’ll interview Jose Manuel Berenguer about this and other projects of Orquestra del Caos, but today let me tell you about Saturday: 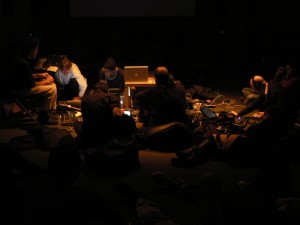 The last act of the Zeppelin festival was quite an interesting proposal, an improvisation for 17 speakers and 7 Internet streaming lines; which involved, simultaneously, artists in 4 cities: Santiago de Chile (Chile), Córdoba (Argentina), Medellín (Colombia), and Barcelona (Spain). The sounds of those cities were also captured, shared and altered, real-time, through microphones placed on the outsides of the venues where the events were taking place.
Not happy with all the computer processing of live sound, the participants brought in a number of gadgets; from altered magnetic tapes to bows and effect pedals, vintage-looking unidentified sound machines, classical instruments, and more. 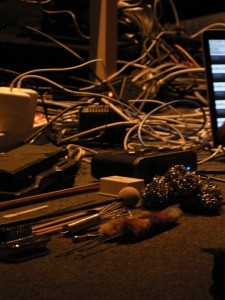 Real-time video taken from the show at one country was projected on the screens at every other country’s show; and you could even follow the encounter through live streaming. The whole project was supported by Anilla Cultural Latinoamérica-Europa, a collaboration network that aims to link Latin America and Europe culture scenarios and actors, through information and communication technologies.

It sounds quite as an über-technical struggle of sorts, but it felt more like a meeting among friends with a taste for sound twisting, and drone surfing; very enjoyable if you are into that kind of thing 🙂

Please, click on the links to know more, and see you next time!

P.S. Sound of the week is Cacerolada, by Mrbardito. A cacerolada is, as he puts it…

“People demonstrating in a political protest, big group of people creating noise by banging pots, pans, and other utensils by some eventual whistling and voices”

… this is a very popular way of protesting in Barcelona, and very very common during the protests that started on 15 May of this year (2011) and gave birth to what has been called the “indignados” movement. But more on that later.