Blog Artists Organisations Events Writings About
Welcome to Sounds of Europe, a platform for field recording. The blog of the website will travel to a different European country every month where a local organisation or artist will be responsible for maintaining it. Each country´s particular context and practices with regards to field recording will be explored and presented in a personal way.
BLOG
A little bit of background
03/14/2013 · marcin barski

First things first, I must admit that writing about field recordings and acoustic ecology in Poland feels very exciting. My perspective is not an artist’s perspective, for this blog I’d rather position myself somewhere between being a researcher, an independent curator and the audience.

Field recording and acoustic ecology are still a sort of novelty here, although recent years saw a growing interest in this field of artistic activities. There are more and more publications, more and more artists use environemntal sounds in their work, also – which is very important – more and more institutions have their minds – and doors – open to this kind of sound art.

But, funny enough, the history of acoustic ecology in Poland reaches back to the 1960’s when composer Witold Lutoslawski started mentioning in his texts and interviews the problem of noise pollution. It was his efforts that triggered – in 1969 – UNESCO’s resolution stating everyone’s right to silence. 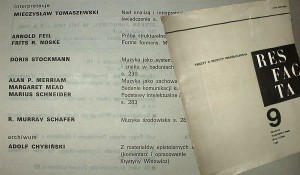 The first translations of R. Murray Schafer texts appeared in Polish music press back in the early 1980’s and although their thesis were noticed and widely discussed in the academic circles, environmental sounds and field recordings remained mostly just another sound source to be treated and used in a same – or at least similar way – as any other instrument or sound source.

This attitude has been present in the academic circles for quite a long time, although out of many composers who were the first to incorporate Schafer’s ideas in their practice it’s worth to mention especially Warsaw’s Krzysztof Knittel, Poznan’s Lidia Zielinska and Krakow’s Marek Choloniewski. An interesting essay on detailed history of acoustic ecology in Poland can be found here. Its author, Krzysztof B. Marciniak, is one of not too many young researchers trying to classify, analyze and put together as much information on the subject as possible.

In the next posts in this blog I will try to focus on the more recent field recording based sound art, describe and interview a few artists, write about sound education and sound awareness that is developing in Poland in recent years.

Today’s only sound example will be Professor Marek Chołoniewski’s very much soundscape-aware performance of John Cage’s 4’33” at Krakow Music Academy last year. This amateur video – to put it simple – shows how much the attitude towards the soundscapes and the listening techniques have developed in Poland since the 80’s. Click on the image below to play the video. 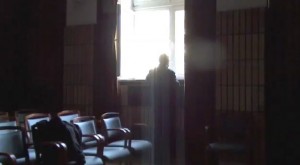