Blog Artists Organisations Events Writings About
Welcome to Sounds of Europe, a platform for field recording. The blog of the website will travel to a different European country every month where a local organisation or artist will be responsible for maintaining it. Each country´s particular context and practices with regards to field recording will be explored and presented in a personal way.
BLOG
Sound-mapping: art or documentation?
03/18/2013 · marcin barski

One of the most attractive and communicative forms of exploring and documenting soundscapes is sound-mapping, an old idea quite popular around the world, one of the finest examples of which is radio aporee’s global sound map.

Public institutions in Poland (both, national and regional) quickly understood the practical, artistic – and promotional – value of such maps and were happy to support such projects here. A number of cities and regions have created their maps – of course thanks to the efforts of local artists and NGO’s. What’s interesting here is the diversity of approaches towards creating such maps. 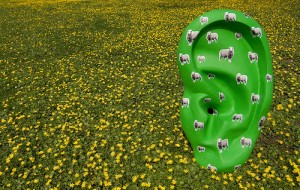 In most cases the sound maps of Poland are focused on the documentary aspect: the recorded sounds are tagged with precise date, location and even GPS coordinates. As if the given sound could be repeated in a precisely same way in the exact location, critics say. Nevertheless, such a precise documentation of soundscapes has got many followers here. One of the finest examples would be the sound map of Wrocław.

Wrocław has got relatively long tradition of sound-mapping. In 2006, Maciej Bączyk, Wrocław-based sound artist and musician prepared a book (accompanied by a CD) entitled „Niewidzialna mapa Wrocławia” („Invisible map of Wrocław”). It was a specific city guide in which blind people where interviewed about certain locations in the city, chosen by themselves with the non-visual but aural criteria. The CD contained recordings of the locations.

The documentary aspect of sound-mapping is also present in the sound map of Lublin, although in this case the authors of the project realised also ten radio shows about various parts of the city. The radio shows, available on this website, are based on the interviews with the inhabitants and present their characteristics of their local environment. 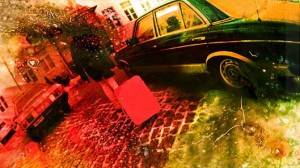 More artistic approach had the three artists who prepared Tonopolis project, an interdisciplinary sound map of Toruń. As they admit themselves, Tonopolis was an audiovisual project in which – what they found rare – the aural part came in the first place, while the visual has been created to fit the soundscapes. Tonopolis website  is carefully designed and for more visual-arts-oriented audience it will probably be the most pleasant to visit of all described here.

Similarly, The Sounds of Małopolska project curated by Małopolski Instytut Kultury, an institution based in Kraków, does put quite a strong emphasis on visual side of things. As well as on the promotional aspect of sound-mapping. The project presents the most characteristic sounds of the region (both, natural and of human origins – e.g. folk music, industry etc.) together with photographs and originally designed and manufactured devices called „earspeakers” – the loudspeakers in a ear-shaped booths which travelled around Europe and promoted the Małopolska region.

Finally, a completely different approach is present in the works of Marcin Dymiter, a sound artist and musician living in Gdańsk. His sound map of Pomerania region (covering the whole Baltic Sea coast of Poland) is quite far from presenting precise locations or from documenting exact aural phenomena. In his study Dymiter tries to show a general „vibe” of the region, avoiding human sound presence as much as possible. This is a documentation of forgotten, lost or desolated places, places „after the high season”, as he puts it himself. In a similar way, Dymiter has worked in Prague, in Czech Republic (see here). He has also released a number of CD’s – „Sound Postcards” series – but I hope to write more about his work in one of the future posts. 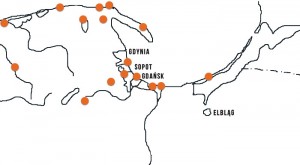 The above list is of course not the full list of sound-mapping n Poland but it gives, I hope at least, a general idea of the diversity in the subject.

← A little bit of background
Artist In Focus: Konrad Gęca →