Blog Artists Organisations Events Writings About
Welcome to Sounds of Europe, a platform for field recording. The blog of the website will travel to a different European country every month where a local organisation or artist will be responsible for maintaining it. Each country´s particular context and practices with regards to field recording will be explored and presented in a personal way.
BLOG
Artist In Focus: Konrad Gęca
03/25/2013 · marcin barski

Konrad Gęca is a Kraków-based audiovisual artist with an electronica, dub and improv background. He is very active in the local field recording and improv scene, for many years promoting concerts and conducting workshops. He’s also performing a lot, recently DJ’ing intermission sets of field recordings at the concerts, in quite an – as he admits himself – Erik Satie’s Furniture Music fashion. I spoke to him about his collector’s nature, amateur naivety and about how much field recording can be an art of communication. 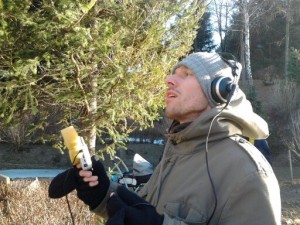 In the first place tell me how did it all start for you, this field recording and your sensitivity to sound?

Ah, I see you’re well prepared for the interview!

Let’s treat it as a starting point for the discussion… I think it’s an important issue, where does it come from?

I’ve always been listening to loads of music and that must have been my introduction to being sensitive to sounds. But my first – or one of the very first – field recording was of some insects by the sea. My parents bought me a video camera and I was recording a lot. At a certain moment it occured to me that the sounds I hear are interesting enough and that I don’t really need the image. I’ve always had a collector’s nature – for years I’ve been collecting sounds, images, videos and objects, I can’t even throw away trash without double-thinking if for sure it won’t be of any use for me in the future. I record the environment around me with sounds and images, I collect them all for no good reason and some of them I later use to create music, while others I leave aside. Some of them are related to certain emotions or thoughts, others can be just useful in some other way in the future.

How exactly do you use the sounds you find interesting?

Mostly in my live sets. I have my sounds catalogued and tagged so I can tell which of them I can use for a specific gig. There are various contexts I use the sounds in, I managed to build a big database of recordings. But the most important thing here is that I keep on recording all those sounds for myself. I keep on studying what effects can recording bring. Same with sounds as with videos. There’s this exploratory aspect to it, but also the technical one: to check how different a certain situation would sound with various recorders, microphones, digital or analogue tools.

What you’re doing then is kind of trial and error strategy, right? How do you think, can unedited recordings have an artistic value? Or do you prefer to cut, mix and edit them?

I like both. I leave many recordings as they are because I feel they’re good enough. It’s my intuition or subjective judgement which decides here. It’s the question of what we want to achieve with the specific recording. Should it be informative or communicative, something that will show a specific situation or an atmosphere of the location – or different way around, should they be sounds that you can’t relate to anything, completely abstract, should they leave some space for your own interpretation as a listener. That’s the two criteria I use when selecting the material to be performed or published.
I like the situation when the listener cannot immediately tell what the sound relates to, when there’s a space for interpretation. When the listener can create his own world based on the rudimentary foundaments of my recordings only.

But I guess there are some musical criteria for your choices, too. Is field recording in your opinion musical at all?

I like to be in the position of an amateur. I think the essence of this work is mainly to ask questions. I don’t really have answers to them. Each time I start doing something there’s only a question in the beginning for me, a starting point to a discussion. I’m not telling it’s this or that way around, I just give possibilities to choose your own answer.

I like to stimulate people to do things. I have been working with sounds for some maybe ten years, obviously I’ve been a listener for quite a long time, too. I enjoyed attending the concerts and respected and appreciated people who have stimulated emotions in me. Working with sounds very much seems to me a form of communication. As said, what I’m doing is supposed only to be a starting point for discussion. We can discuss verbally or with the use of various media. Of course, when it’s a film music, I’m happy to show the effects of my work, but whatever it is, I always hope to have some feedback and comments on my work. Not expecting anyone to tell me I have done okay but to tell me what kind of emotional reaction my work had triggered in them. I feel a need for confrontation, for thoughts exchange – it makes me feel smarter and adds another angle to my future works.

Soon I’ll be doing another workshop – not because I don’t like my job at the hostel reception, but because I like working with people. I like to be inspired by them. Especially when they’re amateurs, when they’re fresh and dealing with something completely new to them. They have this amateur passion in them, without the baggage of earlier experiences, of what you have already done in music, of your strong opinions on sounds etc. For them there’s no lo-fi or hi-fi aesthetics, each recorder has got its own soul, they’re very open to this way of experiencing sounds. In the back of my head there’s always a need to tell stories. You have to decide which medium to use for a particular story: it can be a Zoom or a cassette recorder, or a video camera, or maybe you should actually use a pen and paper to write about it rather than anything else. I prefer this kind of attitude, to be open to any media even if I have never used it before. To take as much out of it as I can. One may call it a childish naivety sort of attitude but I can see a big value in it. Of course you need to be self-critical to some degree but this criticism as well as naivety cannot stop you from doing things your own way.

← Sound-mapping: art or documentation?
The Secret Knowledge of Great Powers →