Blog Artists Organisations Events Writings About
Welcome to Sounds of Europe, a platform for field recording. The blog of the website will travel to a different European country every month where a local organisation or artist will be responsible for maintaining it. Each country´s particular context and practices with regards to field recording will be explored and presented in a personal way.
BLOG
The Secret Knowledge of Great Powers
03/29/2013 · marcin barski

Architecture is built of sound. It is what makes the diffusion of sound possible—absorbing, filtering, and transferring it, amplifying some of its components at the expense of others. Enclosed spaces are room tones, while niches are specific echoes. The ventilation and heating systems are a quiet yet constant noise, whereas windows and walls are the filtered sounds of street bustle, the buzzing of cicadas, or neighbor’s living rooms. The sound-houses which Francis Bacon foretold in his New Atlantis, the ones with new quarter-tone harmonies and artificial echoes, “reflecting the voice many times” and giving “back the voice louder than it came,” transporting it with “trunks and pipes”—they are all here, forming our natural environment. We live, work and play in gigantic complexes of sounds—their distribution is what we call architecture. 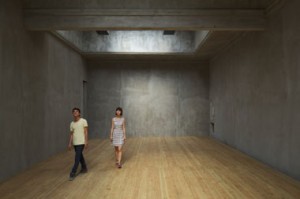 The quote above comes from the curator Michał Libera’s introductory statement for the Polish exhibition at 13th Architecture Biennale in Venezia last year, entitled „Making the walls quake as if they were dilating with the secret knowledge of great powers”. The exhibition was actually a sound sculpture by the artist Katarzyna Krakowiak, who used the Polish Pavillion’s acoustic characteristics to amplify its space as well as the sounds from neighbouring pavillions – and from outside of the building. By doing so, she has created probably the largest – and the most recognizable – listening system for the environmental sounds in the history of Polish art.

Here’s a short interview with both, Krakowiak and Libera, about the idea of the piece:

The sounds of the exhibition had been recorded and released on a CD by the excellent Warsaw-based Bôłt Records. Strangely, this stereophonic version of the sound installation so dependant on the details of the space and architecture of the building in which it was first shown, remains, I believe, quite a precise documentation of the piece’s acoustic effect. The focus is put here on the musicality of the sounds amplified – and altered – by the space, although certain elements can be distinguished in their more or less natural form. This gives the listener an idea of aural phenomena which was the main subject of the sculpture. The CD can be ordered from this website – highly recommended.

Both, Libera and Krakowiak are quite an important figures in the Polish arts scene – at least when we look at it from the perspective of music and sound art. Michał is a very prolific music curator, his activities include promoting concerts and lectures, publishing music and books. More here: Pataka Ind.

Katarzyna Krakowiak is considered to be one of the most interesting young artists in Poland, for the readers of this blog it may be especially interesting that her works focus particularly on what’s invisible: sounds and noises, radio waves and internet technology – and how great powers of criticism sound art can hold. Those interested in her works should in the first place take a look at her „Metaphones”, „all.fm” and „Who owns the air?” projects. More here: Katarzyna Krakowiak’s website.