Blog Artists Organisations Events Writings About
Welcome to Sounds of Europe, a platform for field recording. The blog of the website will travel to a different European country every month where a local organisation or artist will be responsible for maintaining it. Each country´s particular context and practices with regards to field recording will be explored and presented in a personal way.
BLOG
Athenian Composers and sound-recordists part II (Medea Electronique, Soundscapes/Landscapes, Natryx, Ward, Manousakis)
12/07/2012 · Marinos

Medea Electronique, through its members as well as through an ever-changing network of associates, is active in such diverse fields as music, video, design, painting, multimedia, robotics, interactive technology, dance and media production, allowing the integration of every member’s distinctive area of research and practice.  Over the years they have been responsible for works that range from multimedia theatrical plays to experimental audio-visual shows, and from improvised noise music to phonography and electroacoustic composition.  They are occasionally active as organizers, too, being responsible for an annual artist-in-residency project in mount Taygetos in South Greece (the Koumaria residency), for the ElectroMediaWorks festival (in 2008) and the recent ElectronicNights festival (2012) amongst other events.

Field recording practices are not at all alien to their member’s practices.  In several of their projects they use environmental recordings for either compositional or other reasons.  For example, a major aspect of their first residency project was the sounds they collected from mount Taygetos.

Several of Medea’s members and ex-members are actively involved into field-recording in their solo projects as well.  In a previous blog the work of Stelios Gianoulakis (ex-member) was discussed, for example.  Although they rarely use straightforward phonography as a standalone medium, both Manolis Manousakis and Tim ward record environmental sounds, process them and use them in their compositions or performances.  Manolis Manousakis is involved into experimental music composition and media-art as well as in commercial song-writing and sound design for films and theatrical plays.  Tim Ward is a British composer of electracoustic music and a live-electronics performer who lives and works in Greece for almost a decade.

Anastasia Chrysanthakopoulou (ex-member) is involved in music composition, improvisation, trumpet-playing, vocalizing, jewelry design, micro sculpture and wax modeling amongst other activities.  She has also worked as project coordinator and organizer.  She extensively uses field recordings as source material in her sound pieces. 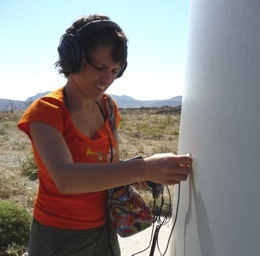 The Soundscapes/Landscapes project emerged out of a micro-residency originally organized by Medea Electronique the April of 2012.  The Soundscapes/Landscapes team was formed by some of the participating artists with the addition of a few Medea’s associates.  Currently the Soundscapes/Landscapes’ team consists of Manolis Manousakis, Tim Ward, Christos Carras (sound artist), Kleopatra Korai, Panayiotis Goubouros (director/video-artist), Costas Bokos (sound engineer) and Marinos Koutsomichalis (composer/sound artist).  The project focuses on the exploration of environmental sound and image as a means to artistic creation.  The artists explore selected locations alone or in small groups, in order to collect audio and video footage which is afterwards classified accordingly and used in audio or audiovisual performances, software development and web-based applications.  The Soundscapes/Landscapes project is a very new initiative structured around the idea of research as artistic practice and, therefore, the specifics of the resulting artworks are still quite vague.  Hitherto they have realized recordings in mount Parnitha, mount Taygetos, in central Athens and in the Greek Musslims Union’ s mosque and they have been responsible for experimental web-based proto-applications, improvised live audio performances and a series of short video/photo studies.