Blog Artists Organisations Events Writings About
Welcome to Sounds of Europe, a platform for field recording. The blog of the website will travel to a different European country every month where a local organisation or artist will be responsible for maintaining it. Each country´s particular context and practices with regards to field recording will be explored and presented in a personal way.
BLOG
Crete: Koutsomichalis, Valsamakis, Tzedaki
12/19/2012 · Marinos

Marinos Koutsomichalis (that is me actually) is an artist currently based in Irakleion and Athens, but active internationally.  Several of his projects involve environmental sound, either as a means in themselves or as elements.  He has recorded sounds with all sorts of equipment in South Greece and abroad, in urban, rural, industrial, wild-life and subaquatic environments.  His most important projects that involved environmental sound are the following (try the links for more info and audio excerpts): cHro(m)A (2008), a series of unprocessed recordings of found machines and domestic appliances. Peripatetic (2009), a fixed media album consisted entirely of unprocessed cityscape recordings; an audio travelogue exploring the musicality of everyday sounds through ambulatory recording practices.  Malfunctions (2009), in which he experimented with non-standard recording techniques in order to capture sounds of electricity, infra/ultra sounds, induction noises, EMF signals, etc.  Paesaggio Sonoro (2011), a multichannel soundscape composition based entirely on the intuitive juxtaposition of (mostly multichannel) soundscape recordings and holophonic spatialization techniques.  3 studies for environmental recordings, VCS3 and studio response (2010), fixed media album where he juxtaposes environmental sound matter with a VCS3 semi-modular synthesizer.  In-Out (2010), a site-specific performative installation for computer-generated audio, full-sphere ambisonics, environmental recordings and additional loudspeakers and subwoofers.  Koutsomichalis is also the director of Agxivatein label via which he has released works by renowned field-recordists Francisco Lopez and Marc Behrens. 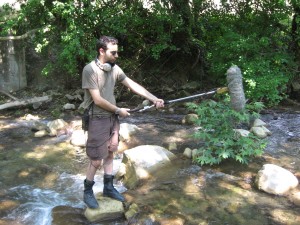 Nikolas Valsamakis & Katerina Tzedaki are both composers of electracoustic music who live in Rethymnon and lecture at the Department of Music Technology and Acoustics of the Technical University of Crete.  Valsamakis has realized field-recordings in several locations in Greece and was also involved in the Antinioti Lake project in Corfu, along with Loufopoulos and other artists.   His field-recording works consist mostly of unprocessed phonography.  Tzedaki uses field-recordings in almost all of her recent electracoustic compositions.  Tzedaki, along with students from her department, have realized extensive field-recordings in Melidoni cave in Rethymnon.  In the ancient times, Melidoni cave accommodated mystic rituals in an inner almost anechoic natural dome (which is not open to visitors), while, during the occupation by the Turks, centuries later, it staged a tragic holocaust which resulted in the death of hundreds of locals.  Both Tzedaki and Valsamakis teach modules related with environmental sound in the Technical University of Crete, and are, also, very active as academic researchers, being both members of the Hellenic Society of Acoustic Ecology and having curated the 2d National Conference of Acoustic Ecology in Rethymnon.

listen to ‘Forest Night’ by Katerina Tzedaki here. Embedded is an interview of hers discussing the soundscape of Corfu. 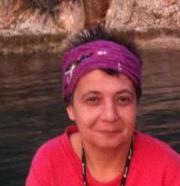